SINGAPORE - Women and women's organisations have played a pivotal role in Singapore since its pre-independence days, but they have not always featured strongly in the country's historical narrative.

Highlighting the contributions of women as the Republic marks its bicentennial this year, Minister for Culture, Community and Youth Grace Fu said on Sunday (March 3): "It is an opportunity for us to reflect on the longer historical evolution of women in Singapore, and impact they made on our nation."

Women, who made up only about 20 per cent of the population here in the 1900s, grew in numbers in the 1920s after colonial authorities placed restrictions on the number of male immigrants, to balance the gender ratio and control the unemployment level, said Ms Fu.

Speaking at a conference organised by the Singapore Chinese Chamber of Commerce and Industry (SCCCI) at the Shangri-La Hotel, she said: "This opened the door for female immigrants. Among these were the samsui women and amahs."

Samsui women, known for their trademark red headgear, found work as labourers in the construction industry, while the amahs worked as domestic helpers.

Noting that these immigrant women achieved financial independence and provided for their families, Ms Fu added that they were an exception of their time because migrant communities here belonged to cultures that constrained women within the limited roles of wives and mothers after marriage.

"This started to change as women galvanised to contribute to war rehabilitation efforts, and set up associations and mutual help groups," she said.

A movement began to lobby for legislation to protect women and give them equal rights, with trailblazers including the likes of Shirin Fozdar, who helped found the Singapore Council of Women, and war-time hero Elizabeth Choy. 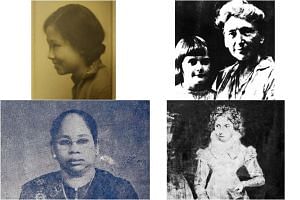 The Women's Charter was enacted in 1961, with other issues such as the quota on female students in medical school addressed in the decades to come.

"We should remember and celebrate the women in our history who pushed the frontiers at a time when social norms set limits on what they could do," said Ms Fu, as she flagged the achievements of pioneers such as Singapore's first woman Olympian Tang Pui Wah and first female police inspector Mary Quintal.

But women continue to face challenges today, struggling with playing multiple roles in life even as they have more opportunities, said Ms Fu.

"We are also encouraging more companies to change their mindsets and offer flexible work arrangements for parents."

Ms Fu said: "We need everyone to be involved in striving towards a gender-equal society."

SCCCI president Roland Ng, who also spoke at the opening of Sunday's event, noted that it is the 25th anniversary of the chamber's Career Women's Group. He expressed confidence that the group will continue to attract talented individuals.