SINGAPORE - What gets flushed down your toilet every day might just not be wasted. After a two-year trial, Singapore's national water agency PUB and the National Environment Agency (NEA) have found a way to make sure of this.

Mix what is flushed down the loo (water sludge) with table scraps, and this stomach-churning mixture becomes a potent recipe for energy. If scaled up, the biogas produced in the process can actually power a large portion of Singapore's water treatment plants.

This is a prime example of how Singapore is turning trash to treasure, particularly in view of 2019 being designated as Singapore's Year of Zero Waste.

The trial, which started in December 2016, involved 40 tonnes of used water sludge (from toilets) and food waste.

Two truckloads arrive every day at the PUB's treatment facility in Old Toh Tuck Road from 23 locations from around Singapore, including Maju Camp, the University Town at the National University of Singapore, and food distributor Tian Sheng Fresh Produce, among others.

The sludge and food waste were then combined, and went through "anaerobic digestion" - a biological process that breaks down organic materials - to produce biogas, the natural fuel produced when organic matter reacts with bacteria.

The sludge and food waste were previously "digested" separately to produce biogas. But when they were combined, the PUB and NEA found that the biogas yield tripled.

The agencies are aiming for this co-digestion process to provide the large amounts of energy required to treat used water in Singapore in the future. This, they hope, will maximise the recovery of resources from food waste, while allowing the Republic to take a step towards energy self-sufficiency in the used water treatment process. 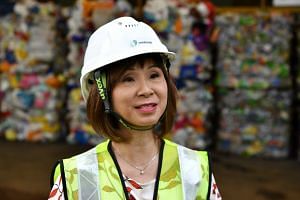 Still some way to go to achieve zero-waste aim in Singapore: Observers

Singapore Works: Where does all your rubbish go?

However, only 16 per cent of food waste (a major waste stream in Singapore) was recycled, said Mr Tan Meng Dui, CEO of NEA. He added that this rate was low, in comparison to Singapore's overall recycling rate of about 60 per cent.

"As the second-largest waste stream disposed of, there is great potential to not only reduce food wastage at the point of consumption, but also to recycle better by developing technologies to turn food waste into higher-value products, such as biogas, for energy recovery," Mr Tan said.

"We look forward to the continued support of the community and industry to co-create zero-waste solutions in this Year Towards Zero Waste," Mr Tan added.

Mr Seah added that as a result of the latest success, the process was likely to be scaled up, in the form of co-locating the facilities of used water sludge and food waste treatment at the new Tuas Nexus.

"This is in line with our continued efforts to innovate and leverage technologies that will allow us to meet future water demand at today's energy footprint," Mr Seah said.

The Tuas Nexus, which consists of the Integrated Waste Management Facility and Tuas Water Reclamation Plant, is scheduled to be completed in 2025.