SINGAPORE - Singapore has to relook the way it uses resources if it is to achieve its vision of becoming a zero-waste nation, said Minister for the Environment and Water Resources Masagos Zulkifli on Saturday (Jan 12).

If done right, the country will also be able to create new economic opportunities for local businesses and jobs for Singaporeans, added Mr Masagos, who was speaking at the launch of Singapore's Year Towards Zero Waste at Our Tampines Hub.

The year-long campaign aims to raise awareness of waste issues here and the need to treasure precious resources.

"This requires a paradigm shift. We need to adopt a circular economy approach," said Mr Masagos, referring to the economic model which aims to reuse and recycle resources for as long as possible.

"Traditionally, we use resources in a linear fashion. One aspect of the circular economy is to turn trash into treasure by reusing and recycling our resources endlessly."

"In doing so, they turn trash into treasure, generating new economic value from something that would otherwise have been thrown away. They have also created new green jobs as skilled workers would be required to perform the conversion process," he added.

Mr Masagos also shared how Our Tampines Hub sends about 700kg of food waste - equivalent to 3,500 bowls of rice - to eco-digesters instead of waste bins daily.

The digesters convert the food waste to water which is used for washing, and fertiliser, which is distributed to Tampines residents for their gardens. 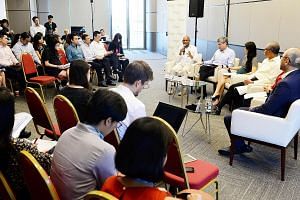 As part of Singapore's Year Towards Zero Waste this year, consultations will be held for the public to contribute towards the inaugural Zero Waste Masterplan, which will detail strategies that the Government will implement in the next few years. The Ministry of the Environment and Water Resources and the National Environment Agency will publish the masterplan in the second half of this year.

A #RecycleRight movement will also be launched to get Singaporeans to recycle correctly, such as keeping recyclable items clean, dry and free from food contamination.

In addition, a grant will be introduced to support relevant ground-up projects.

Singapore generated 7.7 million tonnes of waste in 2017, a sevenfold increase from 40 years ago and enough to fill 15,000 Olympic-size swimming pools. With the current rate of waste generation, Semakau landfill, Singapore's only landfill, will run out of space by 2035.

Mr Masagos said: "Each of us can contribute in our own way towards a zero-waste Singapore."

It is not the first time Singapore has designated an entire year towards supporting an environmental cause.

Last year was set as the Year of Climate Action. The campaign saw over 800 climate action-related events here, including art competitions, apps to track carbon footprints and programmes to encourage recycling.

Mr Masagos, calling the campaign a success, said individuals and organisations stepped forward, with over 340,000 of them pledging to reduce their carbon footprint.

"That is a good start, but we must not stop here," he added. "Climate change will have a growing impact on our lives, more so for our children and much more impact for our grandchildren."