OSAKA - Prime Minister Lee Hsien Loong is in Japan on a working visit until Sunday, and will attend the Group of 20 Leaders' Summit (G-20) at the invitation of his Japanese counterpart, Mr Shinzo Abe.

PM Lee will take part in summit discussions and have bilateral meetings with leaders of other countries on the summit's sidelines, the Prime Minister's Office (PMO) said on Thursday (June 27).

This year's G-20 summit is being held in Osaka, the host country's second-largest metropolitan area, and starts on Friday. The theme for the Japanese G-20 Presidency is to promote a free and open, inclusive and sustainable, human-centred future society.

Mr Abe recently stressed the importance of making the G-20 a meeting that "focuses on where we can agree and cooperate, rather than highlight differences".

"The global situation is severe," he added. "If the G-20 breaks apart, for example in areas like economy or security, it will be over."

Leaders from 20 economic heavyweights will attend the summit, which takes place against a backdrop of trade and geopolitical tensions. All eyes will be on the high-stakes meeting between United States President Donald Trump and Chinese President Xi Jinping, where a failure to strike at least a truce in the ongoing trade war could further cloud the global economic outlook.

Singapore is one of eight non-G-20 countries invited to attend the summit. 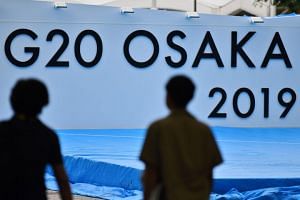 US and China agree tentative trade truce ahead of G-20 summit: Report

PM Lee will be accompanied on his visit by Deputy Prime Minister and Finance Minister Heng Swee Keat, Foreign Minister Vivian Balakrishnan, and senior officials from their respective ministries. Officials from the PMO and Monetary Authority of Singapore are also part of the delegation.