A National Environment Agency (NEA) official has raised the possibility that Singapore residents may in future be asked to "pay as you throw", as part of efforts to monitor and limit rubbish dumped by households.

This could involve bin chutes that use radio frequency identification (RFID) technology to track how much waste any one household produces, he said at a major sustainability conference on Tuesday.

"We are working on a trial to track the number of times a household opens a rubbish chute hatch, with each opening accepting only a fixed volume of waste," said Mr Cheang Kok Chung, director of the NEA's department for environmental protection policy and international relations.

"(There is a) glaring lack of a 'pay as you throw' element in the (waste disposal) fee," Mr Cheang said, adding that Singapore's ubiquitous rubbish chutes made it very difficult to implement a "pay as you throw" system using prepaid waste bags.

He was speaking at a presentation during the 2019 Sustainable Innovation Expo in Nairobi, Kenya. The Expo is being held on the sidelines of the fourth United Nations Environment Assembly meeting.

Each HDB household currently pays $8.25 a month for waste regardless of the amount thrown away. With this new scheme, some might end up paying less.

Said Mr Cheang: "Hopefully (the trial) works and the next time we can report that we are a bit closer to the 'user-pay principle' tax." 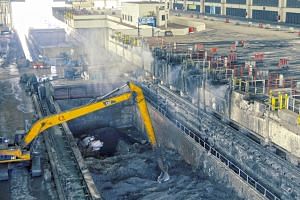 Watch: Where does all your rubbish go?

PUB, NEA find a way to convert sludge and food waste into energy

Only one in 10 young Singaporeans recycles electronic waste: Survey

If there are monitoring systems like RFID tags, people might be motivated to throw less rubbish indiscriminately, which would mean less rubbish landing up in Semakau, Singapore's only landfill.

According to the latest figures, about 200,000 tonnes of solid waste and all incineration ash are sent to the landfill annually.

At this rate, Semakau will be filled to the brim by 2035. It was envisaged earlier that the landfill, when it first opened in 1999, would last until 2045.

Singapore currently has the technology to use RFID tags on bins.

According to reports in 2016, recycling collection crews could scan RFID tags on recycling bins upon collection for recyclables to be tracked in a system.

It is not impossible to implement such a project.

The "pay as you throw" principle has worked in other countries.

In South Korea, for example, households can buy designated bags to dispose of their trash, or take it to centralised RFID food waste and rubbish bins.

There, the trash will be weighed and the household billed accordingly.

The NEA told The Straits Times yesterday that there are currently no plans to introduce pay-as-you-throw RFID waste disposal systems in Singapore.

"Building on lessons from past trials and other countries' experience, the National Environment Agency is constantly exploring ways to incentivise households to reduce the amount of waste disposed of," an NEA spokesman said.

"There is no current plan to implement a pay-as-you-throw RFID waste disposal system," the spokesman added.

Correction note: The story has been edited for accuracy.