Home-grown electronics retailer Newstead Technologies will remain operational for now, following a reorganisation of the company that has seen 40 per cent of its 250 staff let go.

The firm, which operates more than a dozen stores including Apple reseller Nubox and electronics concept store Digital Style, was placed under provisional liquidation last Thursday, according to a statement issued yesterday evening.

The appointed provisional liquidator, Mr Tee Wey Lih of Acres Advisory, together with the Newstead management team, had completed a reorganisation of the company and it is business as usual at all 10 Nubox outlets, as well as selected Newstead stores, the statement said.

"The company will continue to honour all transactions and service commitments during this transition period," the statement said, adding that the firm is in talks with investors to find a workable solution for all parties involved.

The Straits Times reported on Monday that the firm was being voluntarily wound up, with Newstead stores at Suntec City and Marina Square having shut in the last week.

Staff at its office and stores in Sim Lim Square, Nex and City Square Mall declined to comment when approached by The Straits Times yesterday, though sales staff said warranties purchased at Newstead stores would be honoured by product manufacturers.

TRANSACTIONS TO BE HONOURED

The company will continue to honour all transactions and service commitments during this transition period.

Part-time sales assistant Jack Ng, who works at laptop retailer Atrix on the fourth floor of Sim Lim Square, said one of Newstead's four stores in the mall has been closed since last Wednesday.

"The staff came in for a meeting in the morning but instead of opening the shop, they just took some belongings and left," he said. 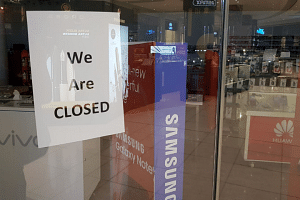 Home-grown electronics retailer Newstead in liquidation; slated to be IT anchor for new Funan mall

Newstead, which was established in 1998, had been touted last year as the largest IT anchor for the upcoming Funan mall, with plans to occupy multiple concept stores across 15,000 sq ft when the revamped mall reopens next year.

A spokesman for CapitaLand yesterday said "discussions with our tenants are ongoing and confidential", and that other IT retailers will include AddOn Systems, T K Foto and GamePro.

Dr Seshan Ramaswami, associate professor of marketing education at Singapore Management University, said that while the usual pressures of e-commerce, rental and manpower may have claimed yet another retail victim, the firm's voluntary liquidation may also point to "financial restructuring to meet some strategic goal", such as consolidation, overseas expansion, or rebranding to an online presence.