SINGAPORE - Cutting-edge technology will be employed to mass-produce mosquitoes to make it easier for scientists to conduct research into ways to control dengue and other diseases.

The boffins need male mozzies, which do not feed on human blood, so they can inject them with a bacterium called Wolbachia.

These males are released and when they mate with females, the bacterium prevents the eggs from hatching, which in turn reduces the number of disease-carrying mozzies.

The Wolbachia study, as it is known, has been underway since 2016 and went up a gear in April with mosquitoes being released on higher floors in HDB blocks and at more frequent intervals.

The limiting factor has been getting enough males but a new initiative involving the National Environment Agency (NEA), local start-up Orinno Technology and Verily, a subsidiary of Google's parent company Alphabet, aims to make the process more efficient.

At present, producing mosquitoes on a large scale is a tedious undertaking.

Researchers have to count batches of larvae by hand and rely on manual methods to sort out males from the larger females, said Associate Professor Ng Lee Ching from the NEA's Environmental Health Institute.

They would then have to manually release batch after batch of mosquitoes at field testing sites.

Adult mosquitoes, for example, may be weaker if they were overcrowded as larvae, or females may slip through the sorting process and affect the consistency of field experiments. 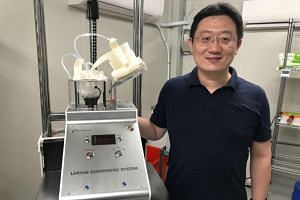 Prof Ng added: "If you want good quality mosquitoes, you must have very systemic production."

That is where the new initiative comes in. It harnesses a range of gadgets to inject more efficiency into the laborious process.

Orinno's technology can count 4,000 mosquitoes in three minutes, instead of the two hours a human would take.

And Verily's automated mosquito sex-sorter is hundreds of times more accurate than a human being, said Mr Nigel Snoad, product manager of the firm's Debug Project, which aims to use technology to improve the mosquito-rearing process.

Verily's automated cart is also designed to disperse Wolbachia-infected mosquitoes in a controlled manner while navigating narrow Housing Board flat corridors. The cart will be tested in Tampines West later this month in a trial that will end in January.

Mr Snoad added that Verily's technology has already been tested in the United States and Australia with good results, although this will be the first time that it will be used in a highly urbanised environment.

"We had to solve the challenge of how to get it in the lift and across the narrow corridors," he said.

The initiative was announced at the Singapore International Dengue Workshop, which started on Tuesday (Sept 18) and ends next week

NEA deputy chief executive Khoo Seow Poh said at the event: "Dengue has posed an enormous health and economic burden on many countries where resources and expertise are limited.

"This situation underscores the need for greater inter-sectoral collaboration to maximise the resources we have, to build more effective dengue control programmes."

Prof Ng also took the opportunity to give an update on the Wolbachia study, saying that results have been "very promising" so far.

"The overall aim is to see a suppressed population in the community," she said. "We will be monitoring the results, monitoring more data, and we hope to achieve that in the next few months."