Up until Sunday, a day before Mr Heng was due to speak in Parliament, he worked with his team - who returned to their office in the Ministry of Finance - to iron out last-minute issues, illustrating the complexities of preparing a "multi-year" Budget that was more than one year in the making.

"I have the master document, so every time we make a change, it sort of percolates to various channels," he said, adding that there have been numerous drafts - so many that he cannot remember the number.

"It is a massive effort."

In an interview with The Straits Times yesterday, Mr Heng eased the largely serious session with moments of light-heartedness, such as when he responded on whether his new haircut was a "Chinese New Year or Budget haircut".

But clearly, what occupied him more was polishing the Budget.

MINISTER HENG SWEE KEAT ON TEAMWORK IN THE CABINET

If you look at healthcare, Mr Gan Kim Yong has been talking about the need for active healthcare - what each of us can do and so on. That sense of teamwork is critical. And I'm very happy that my Cabinet colleagues have also been working very well as a team. One of the most interesting meetings I had was on what we need to do to take care of our elderly better in the coming years. So we had several discussions and one day I got everybody together - ministers Grace Fu, Desmond Lee, Gan. One of the things which minister Gan pointed out was that increasingly, social and healthcare cannot be separated because the two are so intimately linked. And we had such a good discussion. Minister Desmond had earlier also discussed with Kim Yong and they agreed that, yes, you know, we will transfer the whole chunk of what MSF (Ministry of Social and Family Development) is doing for the elderly to MOH for better care. Now, to me, that was really good teamwork in action.

He said yesterday: "It is not an accounting exercise; it is really about our priorities: Where do we want to go? It is about our future - what are the trends and expectations and uncertainties, and how we can navigate this in a very turbulent sea."

Elaborating on his Budget speech delivered on Monday, Mr Heng said he saw the rise of Asia in the global economy, the impact of new technologies on jobs and competitiveness, and Singapore's ageing population as the impetus behind the announcements.

In each of these three shifts, there are what he called "critical uncertainties". For instance, it is not clear how the current global tide of inward-looking nationalism will play out in the next decade and affect Singapore's economy. It is not clear how new technologies will disrupt jobs. It is also not clear whether Singapore will go the way of some countries that do not welcome foreigners, if its population declines.

Said Mr Heng: "It is not to be taken for granted that we will succeed in doing this or that. But if we don't set out the issues, the challenges and opportunities clearly and plainly, we will not be able to respond."

And that, he said, is what he strove to do with the Budget, to get Singapore thinking about where it is heading as a society.

Work on the Budget started early last year, when he knew the Government would be short of revenue after 2020 in view of the challenges. To establish the size of the shortfall, teams of Finance Ministry officers pored over revenue and expenditure projections, while others held discussions with the Health Ministry over healthcare spending - a major component in the future. Questions were debated: How many hospitals would be needed? Eldercare homes? Polyclinics?

I'm squeezing all our ministries very hard by limiting their budget growth factor. In fact, some ministries, especially the smaller ones, are complaining that it's getting harder and harder to manage. But I hope that the message gets across to all, and that we have to learn to do more with less and it applies right across public sector as well as the private sector.

"There was really a whole-of-government effort," recalled Mr Heng.

From day one, his fellow office-holders in the Finance Ministry - Second Minister Lawrence Wong and Senior Minister of State Indranee Rajah - were involved in "many, many good"discussions with him.

And once he flagged the impending fiscal challenge, the entire Cabinet was "very supportive".

By last November, said Mr Heng, the conclusion was that a GST hike by two percentage points was the right answer. This was also when PM Lee spoke of the need to raise taxes during a People's Action Party convention.

On whether the other fourth-generation ministers were all on board, given that the politically sensitive tax hike will kick in during the next term of government - when the team is expected to be holding the reins, Mr Heng said that the matter was discussed early on, and there was "very good consensus among Cabinet colleagues that this is the right thing to do", including the need to cut ministries' budgets.

We think that the Budget is not a one-or two-year annual statement. It is a multi-year agenda that builds on what we have done in the past, that thinks about the future and I would say that we may be a little unusual in sort of taking such a long-term view of the Budget, but I deeply believe that this is critical for Singapore.

"I am very glad that even though this is a difficult decision, everyone was prepared to back it," said Mr Heng.

It was the projection figures that convinced his colleagues on the necessary course of action. "We were confident that despite not being able to foretell the future, we knew for a certainty that there was - like Jack Neo's lovely movie - Money No Enough," said Mr Heng.

With the GST hike set to take effect some time between 2021 and 2025, some have asked if the announcement came too early.

To this, Mr Heng said he believes Singaporeans would appreciate him speaking "plainly" on the need for tax changes. The easy path would be to "put our heads in the sand" and assure people there is no problem. But it is better to set the problem out clearly, though it may be the more difficult route, he said. "It is important for us to be quite honest about it because I don't think we should duck difficult issues."

In fact, once the Budget debate ends, the Government will look at revenue numbers in even greater detail, factoring in trends like fewer future taxpayers, he said.

One question that has been raised is why there were no tax changes targeting wealthier Singaporeans, aside from a 1 percentage point increase in the top rate in the Buyer's Stamp Duty. To that, Mr Heng said the tax system has been tweaked over the years to make it more progressive. This includes a move in 2015 to raise the marginal personal income tax rates for the top 5 per cent of income earners here.

But back to the hot-button issue, does he think being the face of the GST hike will hurt him politically?

Mr Heng, touted as one of three men in the running to become Singapore's next Prime Minister, said simply: "I believe in doing the right thing and so if we are convinced that this is the right thing to do, I think we must have the courage to say it and to do it because we cannot be making national decisions of such a nature by just thinking about, what does it mean for me.

"I think that would be very selfish."

For more Budget coverage, visit the ST microsite at str.sg/budget2018 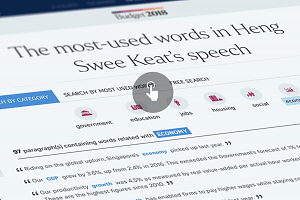