Thirteen students and a teacher from the School of the Arts developed high fever after being bitten by mosquitoes during an overseas service learning trip to Thailand's Ratchaburi province. Nine students and the teacher were later diagnosed with chikungunya fever.

Chikungunya fever is an acute viral disease caused by the chikungunya virus, which is spread to people through the bite of an infected mosquito.

Here's what you need to know about the disease.

These are almost similar to symptoms for dengue, the other Aedes mosquito-borne viral disease, except the joint pains for chikungunya can be excruciating and last for months and, in some cases, for more than a year.

While painful and debilitating, the infection is not life-threatening.

Fewer than 5 per cent of chikungunya patients diagnosed in Singapore require hospitalisation.

There is no vaccine against it or medicine that cures it. Treatment is only for symptoms such as fever or pain.

The culprit for dengue tends to be the Aedes aegypti while the Aedes albopictus is more likely to spread chikungunya.

However, both types of mosquitoes can spread both diseases.

It usually takes three to seven days from the time a person is bitten by an infected mosquito for symptoms to appear.

However, people can sometimes become sick just two days after being bitten, or as late as 12 days after.

The disease is spread when a mosquito bites an infected person. The virus replicates in the mosquito and is passed on to people subsequently bitten.

The best way to stop the spread of the disease is to prevent mosquitoes from breeding and guard against mosquito bites. 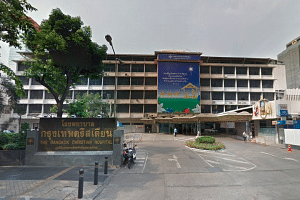 A mosquito needs just a small spoonful of stagnant water to breed.

The Aedes aegypti breeds well in indoor receptacles but the Aedes albopictus prefers forests and places with high vegetation.

During the first week of infection, the chikungunya virus can be found in the blood and passed from an infected person to a mosquito through mosquito bites.

An infected mosquito can then spread the virus to other people.

Those infected should wear long sleeves and long dresses or pants, and use insect repellent to prevent getting bitten again by mosquitoes, which could continue the chain of transmission.