"Our hospitals and healthcare workers cannot be overburdened. At this point, this is MOH's biggest challenge and we are doing our best to solve this," Mr Ong said in a Facebook post, adding that this is why younger, fully vaccinated people are being encouraged to recover at home.

His comments come a day after the Ministry of Health (MOH) said some public hospitals here have been experiencing a surge in patients who have rushed to A&E departments with mild respiratory infection symptoms.

Although MOH did not specify which hospitals it was referring to, public hospitals had put up announcements last week alluding to the situation.

Last Tuesday, Singapore General Hospital put up a Facebook post saying it was seeing a high number of patients at its emergency department, and said priority would be given to the critically ill.

"If your condition is not critical, please seek medical attention at a general practitioner (GP) or polyclinic," said the hospital.

The National University Hospital put up a similar post on Friday.

And on Sunday, Tan Tock Seng Hospital (TTSH) announced on its Facebook page that it had been receiving higher than usual Covid-19 positive and suspected cases, both via walk-ins and ambulance, at its Emergency Department.

“The last week has been rough,” said the hospital in its post.

TTSH said that in addition to tending to other emergency cases, its Emergency Department also has to triage Covid-19 cases to decide where they should be sent for treatment. Those who have the disease are admitted to the National Centre for Infectious Diseases, while those who are suspected cases are admitted to designated wards at TTSH.

It added that those who are stable are sent home or to community care facilities to recover.

Reiterating the need for non-emergency cases to seek help at a GP or polyclinic instead, the hospital said: “With the surge in community cases, we are working hard to open more waiting and screening spaces, and activating more wards and staff to augment our Covid-19 response. There may hence be inconveniences such as a longer wait time, a rescheduled clinic appointment or visit restrictions. We ask ahead for your understanding and patience to ride this wave out together.”

Khoo Teck Puat Hospital said on Facebook on Sunday that it has been seeing increased numbers at its A&E department. "Priority is given to those who are critically ill, and the waiting time for other patients is expected to be longer," it said.

Number of Covid-19 patients in ICU can go up very quickly, so S'pore cannot afford to be complacent

On Saturday, MOH urged those who have mild symptoms to avoid seeking treatment at the hospitals and consult a GP at a Swab and Send Home clinic instead.

"This allows those with more severe illnesses and who are in need of urgent care to be attended to quickly and helps to preserve hospital capacity for those who truly need hospital care," said MOH.

Mr Ong and the multi-ministry task force on Covid-19 that he chairs has repeatedly said a key measure of Singapore's fight against the coronavirus is whether its hospital system can cope with the number of cases.

In his post on Sunday, Mr Ong also highlighted data from MOH that showed the chance of someone infected with Covid-19 coming down with severe illness depends heavily on age and vaccination status.

For instance, from May 1 to last Thursday, no one fully vaccinated and under the age of 70 had been admitted to ICU or died from Covid-19.

Some parents call for HBL to start from Sept 20, others would prefer less disruptions

Mr Ong also noted that more than 98 per cent of those infected from May 1 to last Thursday had either no or mild symptoms, and tended to remain that way until recovery.

"This is so that hospital beds and A&E services go to those who need them most." 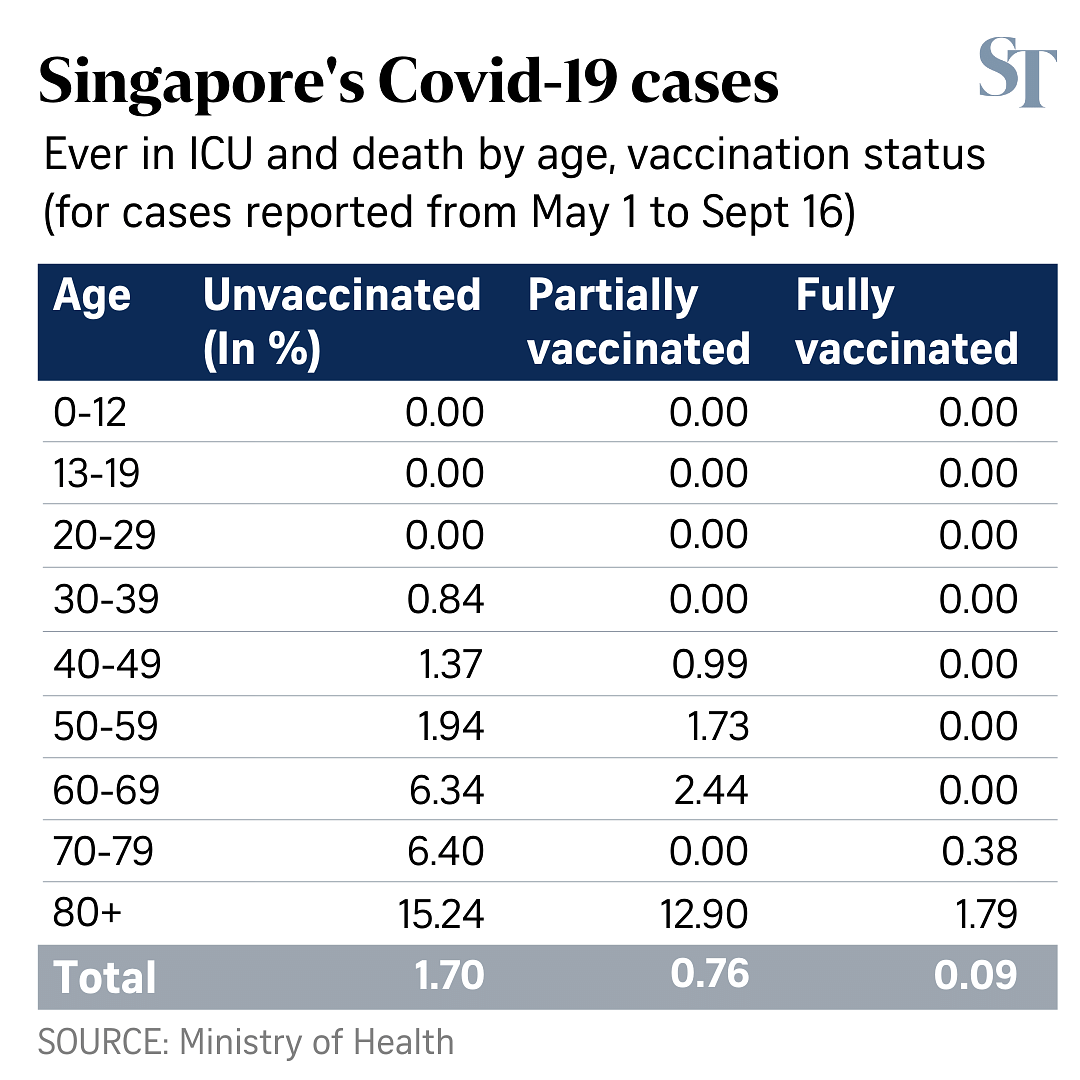 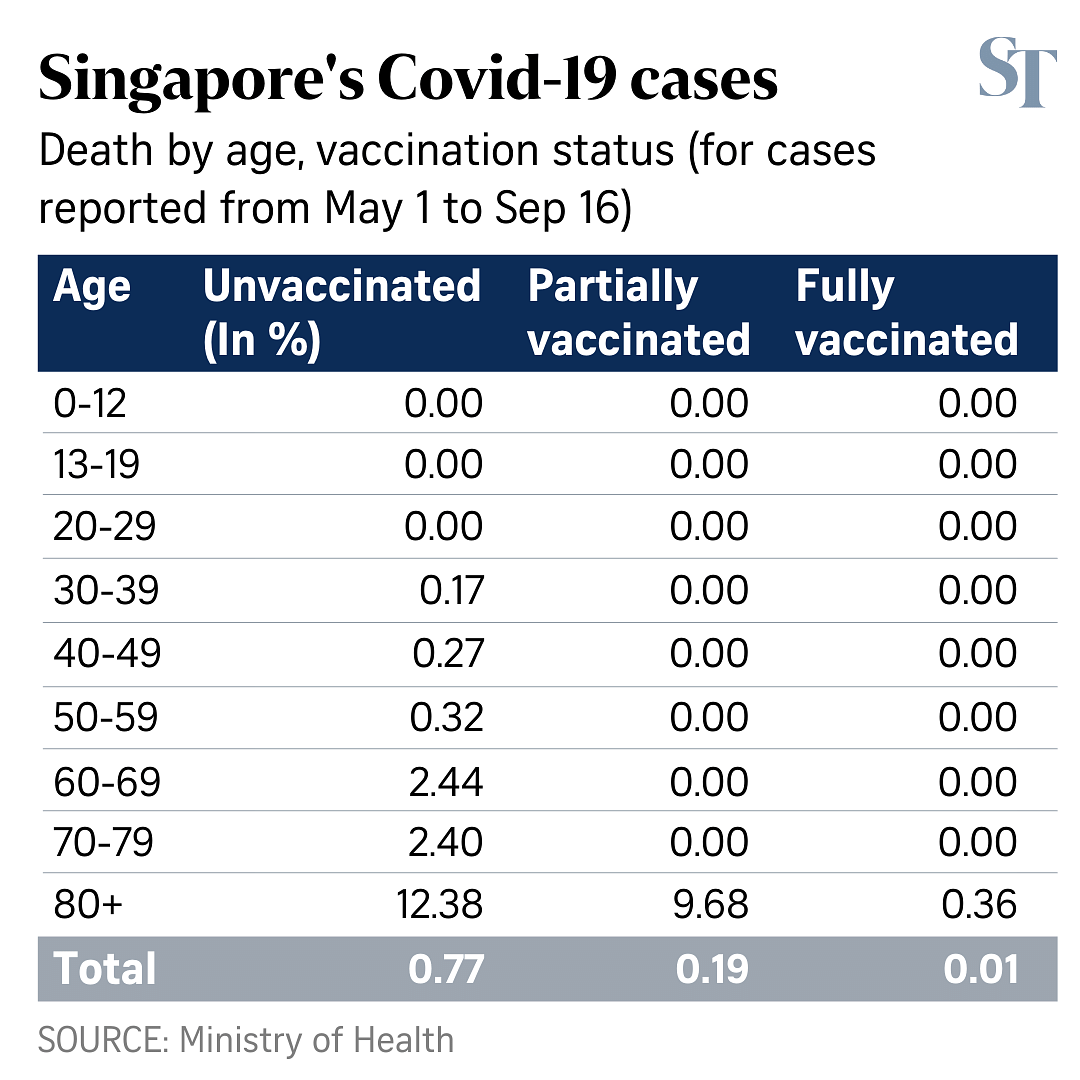