A new incubator here wants to groom polytechnic entrepreneurs and help their ideas take flight. Pollinate, a joint initiative across three polytechnics - Ngee Ann, Singapore and Temasek - is the first of its kind that supports entrepreneurship efforts by polytechnic alumni. The incubator started operations in July and has 14 start-ups occupying its space at start-up cluster JTC Launchpad @ one-north in Ayer Rajah. There are plans to grow the number to 30 in three years. The Straits Times features two of the start-ups.

It all started with an invitation to go on a hike.

Using social networking site Meetup.com, Ms Chong Lee Ling and a friend asked if anyone wanted to join them for an 8km trek in the West Coast area on a Sunday.

To their surprise, close to 50 people turned up that morning in 2015.

"We got a shock. People actually chose to come, even at 8.30am on Sunday," said Ms Chong, 45, who was then a bank project manager.

The first hike went well and that spurred the duo to go further, organising more trips to places off the beaten track, such as Fort Serapong on Sentosa and Keppel Hill.

Wartime relic Fort Serapong, built by the British on the island, is larger than the more famous Fort Siloso, said Ms Chong.

People came for the tours and they said they liked outdoor activities, but none of their family or friends would do it with them.

MS CHONG LEE LING, one of the three co-founders of 3Playgrounds, on the growing demand for adventure trips.

"It's like a mini Angkor Wat. It's hidden in the jungle, not 'pretty-fied'," she added, referring to the temple complex in Cambodia.

The duo are now the co-founders of an online business, 3Playgrounds, for people to organise adventure trips and find fellow travellers.

The site has 18,500 unique users, and has helped organise more than 200 trips within Singapore and to more than 20 countries such as Indonesia, Iran and Canada.

Ms Chong and her friend, who declined to be named as she is working on the project on the side, met fellow co-founder Britta Hummel, 38, at a networking session for female entrepreneurs in 2015.

Ms Hummel, a German who had worked in start-ups in Silicon Valley for seven years before moving here with her husband, was taken with their idea of organising these tours.

It took a few months of talking to people in the outdoor adventure community and organising more adventure tours to figure out if there was a growing demand for these trips. 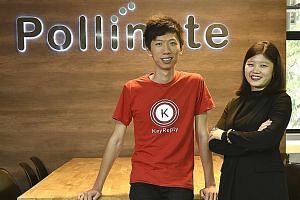 Said Ms Chong: "People came (for the tours) and they said they liked outdoor activities, but none of their family or friends would do it with them."

They received some funding from Ngee Ann Polytechnic, where Ms Chong was an alumna.

In June, the team moved to Pollinate, a new incubator for polytechnic alumni at start-up cluster JTC Launchpad @ one-north in Ayer Rajah.

They had a start-up capital of about $100,000 - a requirement for them to get a travel agent licence.

They earn a commission for every booking.

Trips range in price from $80 for two days in Malaysia to $600 for four to five days in Thailand, and $8,000 for three weeks in Peru, including a tour of Machu Picchu, a 15th-century Incan citadel in the Andes mountains.

3Playgrounds' adventure tours are filled with sports and outdoor activities. For instance, travellers can paddle rafts, cycle or ride horses in Slovenia, swim with jellyfish off the Indonesian Togean islands or trek towards Gunung Colo, an active Indonesian volcano on the Equator.

The business turned profitable within a few months. 3Playgrounds' website gained 10,000 users within a year, with about 45 sign-ups daily in the first few weeks.

Some 70 per cent of the trip participants are women. "Many are working professionals looking for travel buddies," said Ms Hummel.

The team hopes to scale up internationally next year to attract travellers from places such as China and Hong Kong.

Said Ms Hummel: "People are bored of the normal holidays with city life, malls and tourist attractions. They would rather buy experiences than buy things."