An online robot with a human touch has helped a start-up clinch a major government project over six rivals.

Making the win sweeter was the fact that KeyReply was started by three Singapore Management University graduates only in 2014, making it one of the youngest companies to bid for the project.

To win the project, teams had to build a chatbot - a kind of Web robot - to serve various government agencies in Singapore through one central platform: the gov.sg Facebook page.

The chatbot will be responsible for replying to queries posed to the page by users.

KeyReply won the one-year contract to build, deploy and maintain the gov.sg bot.

One of the firm's co-founders, Ms Carylyne Chan, 26, said: "It was our very first tender and we did not expect to be accepted by such a high-profile client."

When we struck upon something we wanted to solve and an area where we could make an impact, I put everything down to make it happen.

MS CARYLYNE CHAN, one of the three co-founders of KeyReply, on her decision to become an entrepreneur.

What made its bot stand out was its "human-like feel", said the company.

Ms Chan explained that the bot, unlike others, does not operate on the basis of picking out keywords.

Instead, the KeyReply bot is able to compare incoming words and data with what it already knows. It can understand the user even if keywords are not used or are shortened.

For example, even if the word "config" is used instead of "configuration", the bot will still be able to figure out what the user means.

So, the bot is able to understand what the user is asking over 90 per cent of the time.

Ms Chan, a business management and marketing graduate, added that the bot is programmed to have some personality, and can adapt to the style and brand of the company that employs it.

She met the other members of the company - Mr Spencer Yang and Mr Max Xu, both 28 - in university. Instead of getting a regular job like most of their peers, the group decided to take a risk. 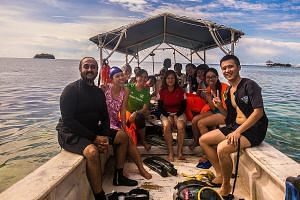 Ms Chan attributes her decision to pursue entrepreneurship to a sense of single-mindedness.

"When we struck upon something we wanted to solve, and an area where we could make an impact, I put everything down to make it happen," she said.

The trio worked on their product in Silicon Valley for two years before moving back to Singapore early this year.

Being here has allowed them to meet many like-minded individuals and grow their product with the help of fellow tech entrepreneurs.

KeyReply is based in local incubator Pollinate, a technology start-up incubator jointly coordinated by Ngee Ann, Singapore and Temasek polytechnics.

Ms Chan said the start-up has raised about US$250,000 (S$336,650) for its chatbot. The funds were raised through several investment rounds with the support of its American incubator.

Some of the firm's clients include jeweller Goldheart, local insurance agency MSIG and Ngee Ann Polytechnic.

Ms Chan said winning the government tender was like an endorsement of their efforts.

"Winning it felt really exhilarating, to know that our product that we had worked so hard on is useful and desirable to the client."