SINGAPORE - With the Ministry of Education's (MOE) removal of the Normal stream label, more classes in future may not be organised along academic tracks.

Education Minister Ong Ye Kung cited on Tuesday (March 5) the example of Edgefield Secondary School, which took the pioneering step of reshaping its form classes so that students - no matter their stream - can build friendships with each other.

Since January 2019, each Secondary 1 class is made up of students from different streams. They take about half of their lessons, such as physical education, art and music, together while for academic subjects like mathematics and science, they break into groups by their assigned streams: Express, Normal (Academic) and Normal (Technical).

Mr Ong said most students told him they were happy with their new classes and their parents felt the arrangement was better.

But he also heard from the school's principal, Mr Lee Peck Ping, that a handful of parents were concerned the new approach might slow down learning in class.

"To reassure them, Peck Ping painstakingly explained how subject-based banding works, what students are learning together as a form class, and how classes for academic subjects are still banded based on the learning abilities of the students," he said.

"He told me a very small number of parents were still worried and felt that had they known, they would not have sent their child to Edgefield," he said, adding that he understood their concerns.

"But Edgefield Secondary was making the right trade-off to develop students both academically and socially. It was in its own way taking the lead in reshaping our existing culture for the better," Mr Ong said. 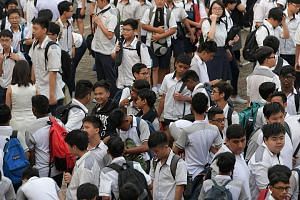 Secondary school streaming to stop in 2024, replaced by subject-based banding

By 2024, more schools will adopt such innovative ways of organising their form classes.

In an interview with The Straits Times, Mr Lee said he decided to reorganise Edgefield's classes after implementing subject-based banding last year.

"Generally, students have been very positive," he said. "They feel they have been developed in terms of their strengths and passions in some subjects. They feel it has also helped them very much in terms of self-confidence and self-esteem."

But some Normal (A) and Normal (T) students also said they do not feel a sense of belonging to the Express classes, he noted. This is because the students tend to stay apart from each other as they come from different classes.

The work was tremendous before the school implemented its new class format. It went through more than 100 permutations of the timetable before coming up with the final version. In drawing it up, the school had to consider such factors as the availability of classrooms and teachers, and ensuring the students' school hours are not extended and teachers' workload not increased significantly.

"We also tried to allocate venues close to each other to minimise students' walking distance and to maximise curriculum time," said Mr Lee.

He added that there is now a greater need for teachers to have better professional skills in classroom management and differentiated instruction.

He also hopes his students will develop traits such as empathy and compassion.

"At the same time, (they) must also be able to recognise that different students actually have different strengths that they can leverage on, and in that process develop collaborative skills."

Ms Alfieana Alphonso, who has a Sec 1 class, said: "Lesson planning can be challenging and it requires teachers to really know their students and their strengths well."

She added that teachers differentiate their teaching subtly, for instance, by providing different worksheets in a single classroom.

"Secondary school isn't just about academic achievement," she said. "It's also about building memories and experiences with others from different streams."

Sec 1 student Muhd Abid Muhamad Zahid, 12, from the Express stream, only found out that his class had students from different streams in the second week of school.

"There's no difference between us... We have more friends and we don't look down on each other," he said. "I'm not so good in science, so my N(A) friend will help me when we do work in the library together.

His classmate Heidi Loh, a Normal (A) student, said: "No one really cares about which streams we come from. I take Chinese at Express level and I don't feel different from the Express students because we're in the same class.

"If a class is sorted by different streams, they will only know each other. They may not want to make friends with us and may look down on us."

Sec 1 Normal (T)) student Javier Peh, 12, said he has good friends from the other streams. They go for recess together, chit-chat, play and help each other with school work.

He also takes mathematics, Chinese and English at the Normal (A) level.

"I like my new class because I have a lot of friends to talk to and I'm never lonely."