With local universities expanding places for medicine and in a bid to maintain the quality of doctors here, the authorities have cut the number of approved overseas institutions from 160 to 103.

This means that from next year, students hoping to practise medicine here after studying overseas will have fewer schools to pick from. Those who have already secured a place or who are currently studying at one of the 57 dropped institutions will not be affected.

Eight schools in the United States, seven in Canada and six each in Britain and India are among those whose fresh medical undergraduates will no longer be allowed from next year to register to practise in Singapore.

The last time the list of schools was reviewed by the Singapore Medical Council (SMC) and the Ministry of Health (MOH) was in 2009. Two schools were added while one - Delhi University's Maulana Azad Medical College - was removed.

In a statement yesterday, the authorities said the latest review took into account the national and international rankings of the universities on the list, as well as the performance of conditionally registered doctors who studied there.

"In line with MOH's Healthcare Manpower Plan to provide quality healthcare services for Singaporeans, we have been growing our local healthcare training pipelines and building a strong local core to meet the healthcare needs of our ageing population," the statement added.

"The impact of the increase in local medical school intake will be fully realised from 2023, when these students graduate. As such, we expect our need to recruit overseas-trained doctors to moderate and stabilise in the coming years."

SMC told The Straits Times yesterday that in recent years, it has registered about 120 doctors who were trained at the affected schools each year, about 30 of whom are Singaporeans and PRs.

There will no longer be any medical schools from Israel, Italy, Norway, Pakistan and Sri Lanka in the approved list, with the removal of schools like Tel Aviv University and the University of Oslo. 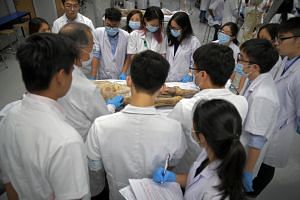 Some British schools being removed had previously reported low intakes of students from Singapore.

The Queen's University of Belfast said in 2017 that on average, one student from Singapore completes its undergraduate medicine programme each year, while the University of St Andrews in Scotland said it had about three a year. Both universities said the figures remained stable over the previous decade.

In contrast, Imperial College London said that from 2010 to 2017, it saw between 11 and 24 graduates from Singapore a year. It will continue to be an approved medical school.

•Royal College of Surgeons in Ireland (National University of Ireland)

•The Hebrew University of Jerusalem

•The Queens University of Belfast

•University of Newcastle upon Tyne

•College of Medicine, University of Wales*