SINGAPORE - When Bangladeshi construction worker Titu Md Majadur Rahman used a self-administered antigen rapid test (ART) and tested positive for Covid-19 last Wednesday, he was sent to a recovery facility in the S11 dormitory in Punggol where he stays.

After he tested negative on Saturday (Oct 16) - on Day 4 - he was allowed to return to his own room.

These changes in health protocols announced earlier this month, which include using quicker and less-invasive ARTs and recovery within dorms, have come as a relief to residents.

Mr Titu, 36, who has been working in Singapore since 2009, said a whole block in the dorm - once the site of the biggest cluster in Singapore - would previously have been locked down when one person tested positive on a polymerase chain reaction (PCR) test. The complex can house 14,000 workers.

"Now it's just one room at a time... Every worker knows what the procedures are if they test positive so it's not so scary. We are all vaccinated, and the Government and healthcare in Singapore are good, so we aren't worried," he said.

While the updated protocols for migrant worker dorms have meant fewer disruptions to work and life, an incident at Jalan Tukang Westlite dormitory last Wednesday has highlighted the difficulties faced by dorm operators trying to cope with changing rules and a surge in cases.

Workers at the dorm in Jurong said they were not given proper access to medical support or properly isolated after they tested positive for Covid-19. Things came to a head when workers were seen gathering in the dorm to speak with staff, in videos posted online.

The Ministry of Manpower's (MOM's) Assurance, Care and Engagement group chief Tung Yui Fai said during a visit to the dorm on Friday that an unexpected increase in workers who tested positive there had contributed to delays in sending them to recovery and healthcare facilities.

But in the last two days since his division's intervention, the conveyance has been observed to be smooth with no significant delays, he added.

In a statement on Saturday, MOM said that 55 per cent of the workers staying at the Jalan Tukang dorm have verified their vaccination status, or have been vaccinated. The rest are either pending verification, or have not received a Pandemic Special Access Route or World Health Organisation Emergency Use Listing Procedure vaccine.

Mr Eugene Aw, who is business director of RT Group, a company which runs five factory-converted dorms, said operators are finding it hard to carry out the authorities' instructions amid a manpower crunch.

"There is some confusion because there has been an overwhelming amount of information and workload," he said.

They are also relearning how to handle positive cases. In the past, workers who tested positive had their movements restricted, but now they can return to work if they test negative on Day 4 or 7 after an infection.

Mr Aw said there were also instances where workers tested negative, but an app they use showed they should not be allowed to leave the dorm.

"As dorm operators, we are unsure as to who is accountable for their movements," he said.

Amid the confusion, one employer, who spoke with The Sunday Times, has moved six of his workers from a purpose-built dorm to temporary quarters. The construction company director said the dorm had failed to isolate his workers properly after their Covid-19 pooled test last month produced inconclusive results.

But the situation is far different from what it was during the circuit breaker period last year, dorm operators said.

There are no longer movement restrictions affecting large numbers of residents, which prevents them from going to work, said Mr Johnathan Cheah, managing director of S11 Dormitories.

It has also set up dormitory recovery facilities to isolate workers who test positive on ARTs, he said, adding that they have 2.5 per cent of the dormitory's capacity of 14,000 beds. An additional 3,000 beds have also been set aside by the dorm as a centralised recovery facility.

Appointed workers from each room have been trained to supervise ARTs done in the rooms, and ensure that their roommates follow the protocol to upload their test results, he said.

Mr V. Manimaran, operations manager of Wee Chwee Huat Scaffolding and Construction, said that for the dorm in Woodlands run by his company, positive cases are moved to recover elsewhere, such as at Covid-19 treatment facilities.

The updated protocols have been less disruptive, he said. "We hope that this move can bring us towards an endemic Covid-19 state soon."

After 10 months of near-zero cases in migrant worker dorms since October last year, infections have re-emerged in recent months, as Singapore embarks on its transition to live with Covid-19. Here is how the caseload compares with last year. 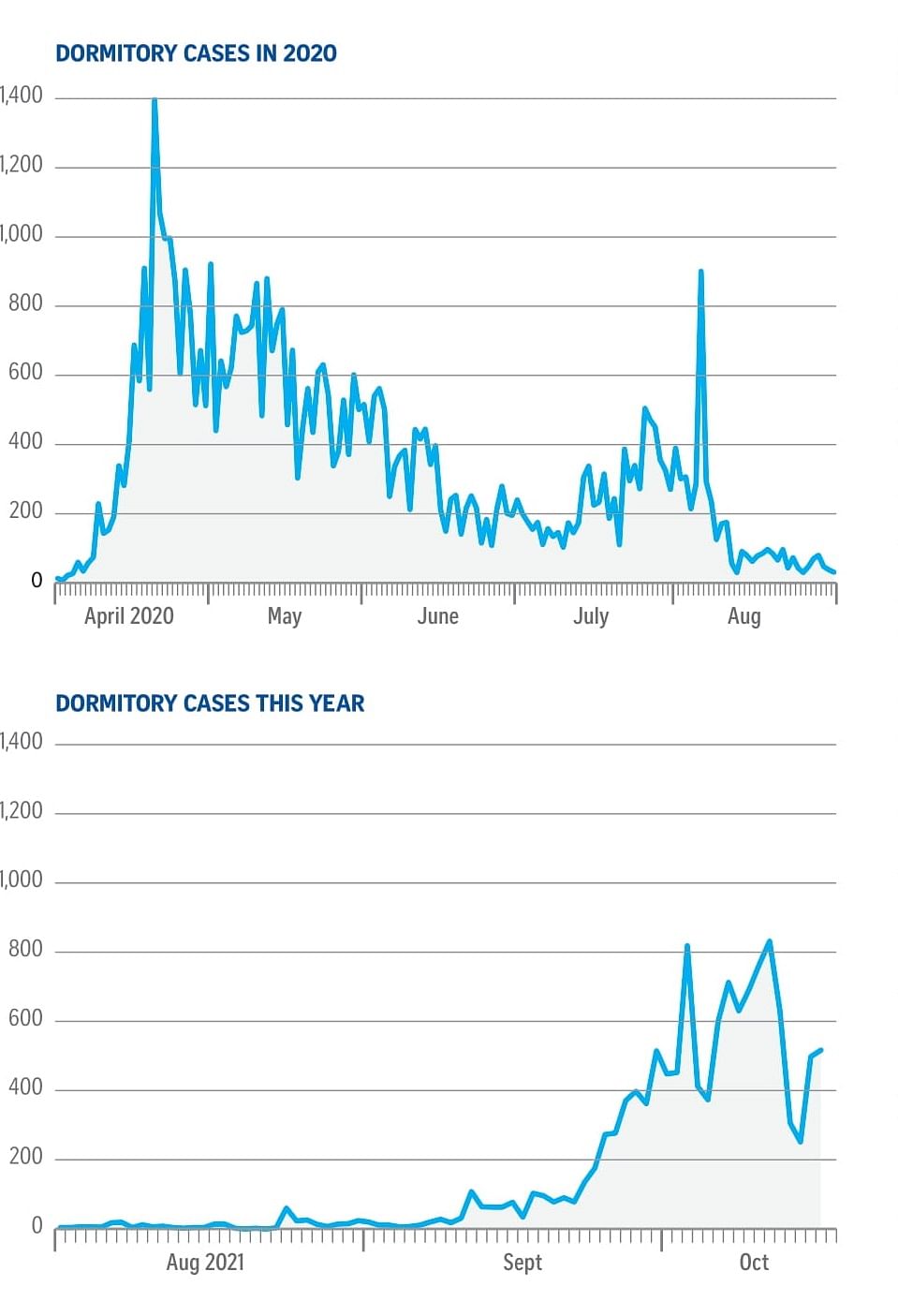 Progressively, only antigen rapid test (ART) will be used for rostered routine testing. Dormitory residents with acute respiratory illness symptoms should continue to report sick at one of the regional medical centres and a polymerase chain reaction (PCR) test will be administered if needed.

Quarantine orders will be issued only to roommates of those who test PCR positive. The quarantine period will also be reduced from 14 days to 10 days from the date of last exposure to the confirmed case, with workers to self-administer ART from Day 11 to Day 14. Other close contacts in the dormitory may be issued with either a health risk warning or health risk alert.

Fully vaccinated workers who tested positive for Covid-19 and have no symptoms can isolate and recover in a dedicated facility within the dormitories for up to 10 days. Symptomatic workers will be given a confirmatory PCR test and taken to community care facilities or hospitals depending on their condition.