SINGAPORE - The police are probing 128 suspects for scam and money mule activities, after an islandwide operation conducted between Monday (Sept 16) and Friday.

The police said 80 male suspects and 48 female suspects aged between 15 and 74 are believed to be involved in 260 cases of scams, mainly involving e-commerce and loan scams.

The suspects are being investigated for cheating or money laundering.

Those convicted of cheating may be jailed for up to 10 years and fined.

Those convicted of money laundering under the Corruption, Drug Trafficking and Other Serious Crimes (Confiscation of Benefits Act) may be jailed for up to 10 years, fined up to $500,000, or both.

The probes come even as the number of scam cases has been rising. 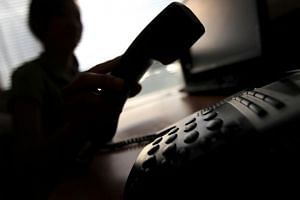 Student loses $500,000 to scammers claiming to be Chinese officials

More scam victims in first half of 2019, especially for loan and credit-for-sex scams

About half of the cases took place on Carousell, a decline from the 74 per cent in the first half of the previous year. Common transactions on the platform that turned out to be scams involved the sale of electronic items, tickets, hotel room bookings and vehicle rentals.

However, there was a rise in the number of e-commerce scams on other digital platforms such as Facebook, Instagram, Shopee and Lazada.

The police warned the public to be wary of e-commerce scams by avoiding impulsive purchases of items at cheap prices online before verifying the seller's authenticity.

The public was also advised to avoid falling for scammers who may use local bank account or NRIC details to convince their victims.

Consumers should also avoid making advance payments or deposits before the receipt of the item, and reject requests by others to use their bank accounts or mobile lines, which could be used for illegal transactions, said the police.