SINGAPORE - Ferrari driver Shi Ka Yee, 72, who was convicted of assaulting a fellow motorist, was back in court to face two new charges, including one count of drink driving.

The other charge was for failing to provide without reasonable excuse a breath sample to a police officer last year.

This took place at around 12am on Feb 1 last year when Shi was in her car outside the Grand Hyatt Singapore hotel in Scotts Road.

She was later found to have 103mg of alcohol in 100ml of blood, according to court documents. This was way above the legal limit of 80mg per 100ml. The court papers did not say how the blood sample was obtained from her.

Before then, she is expected to be sentenced on Friday (March 16) for assaulting BMW driver Raphael Chong Yen Ping, 39. She was convicted on Aug 17 last year following a two-day trial.

Mr Chong suffered a cut above his right eyebrow after Shi punched him in Telok Ayer Street at around 5pm on Feb 25, 2014.

Besides these cases, Shi has six other charges against her. They have been stood down and will be dealt with at a later date. 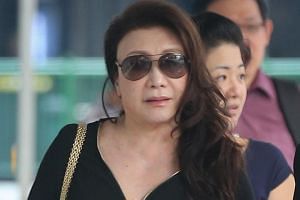 Elderly Ferrari driver's depression not a contributing factor to her committing assault: Judge 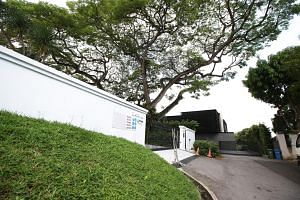 Four of them relate to an incident involving overhanging branches of a rain tree growing on her property in Astrid Hill, near Holland Road.

Shi allegedly harassed her neighbour, Mr Nasrat Lucas Muzayyin, at around 9.30am on Feb 17, 2015 by using abusive words on him.

She is accused of trespassing into his property about 10 minutes later to remove an ignition key from a crane, immobilising it and trapping a worker, Mr Ankathi Thirupathi, in the crane bucket. Mr Ankathi was there to prune the tree that was at least 80 years old.

Shi is said to have confined him there for more than an hour. She also allegedly committed a rash act at around 9.50am that day by revving the engine of her car and moving it towards Mr Muzayyin while he was standing in front of the vehicle.

The remaining two charges have to do with an incident that took place at around 5.40pm on June 29, 2016.

Shi allegedly stopped her car in between two lanes in Orchard Road, just after the Claymore Road junction, causing an obstruction. She is also accused of harassing one Mr Wu Xiaokui by using insulting words on him.