SINGAPORE - A district court has accepted that an elderly Ferrari driver was suffering from depression when she punched a fellow motorist in Telok Ayer Street on Feb 25, 2014.

District Judge Chay Yuen Fatt however found that Shi Ka Yee's depression was not a contributing factor to the offence.

He delivered his findings on Thursday (Feb 22) following a hearing to determine her mental condition.

On Aug 17 last year, he convicted the 72-year-old woman of assaulting BMW driver Raphael Chong Yen Ping, 39, following a two-day trial. Mr Chong was left with a cut above his right eyebrow.

Shi's personal psychiatrist, Dr Pauline Sim Li Ping, testified in court on Wednesday that her patient was diagnosed with depression in 2009.

Dr Sim, who is a consultant psychiatrist at the Mount Elizabeth Medical Centre, said that people with depression tend to react to provocation without thinking of the consequences. She said this could have been the case with Shi.

The psychiatrist said that Shi felt disappointed and "taken advantage of" upon finding out that her husband was having an affair with a woman from China.

Dr Sim added that Madam Shi often thought she was being taken advantage of as she is a woman.

"She was shocked that a BMW driver would be rude to her... that's why she reacted.

"It would be disastrous to incarcerate her... treatment would be better." 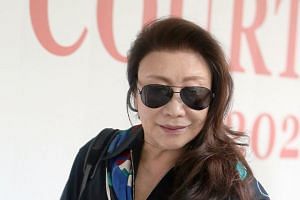 He had told Judge Chay on Wednesday that there are nine symptoms of depression according to the Diagnostic And Statistical Manual Of Mental Disorders, which is widely used by psychiatrists.

They include fatigue, recurrent thoughts of suicide, insomnia and diminished interest or pleasure. DPP Zhuo had also pointed out that for somebody to be diagnosed with depression, he or she must display five or more of these symptoms.

Dr Sim testified on Wednesday that Shi did not display six of the nine symptoms and added that the manual was only a guide.

During the trial last year, the court heard that Shi punched Mr Chong because she felt that his BMW was blocking the way in Telok Ayer Street.

Shi, who is represented by lawyer Irving Choh, is slated to be sentenced next month. Offenders convicted of assault can be jailed for up to two years and fined up to $5,000.