Frustrated with a classmate who had missed scoring a goal during a football game, Muhammad Hambali Sumathi, 12, ran towards a goalpost and grabbed hold of the crossbar, which was 2.44m from the ground.

That turned out to be a fatal act.

The Secondary 1 student from Geylang Methodist School (Secondary) (GMSS) had swung his body forward and both his feet became entangled in the net of the goalpost.

An inquiry into his death yesterday heard that at this point, he likely struggled.

This caused the sides of the goalpost to unfold and as the structure collapsed, the crossbar struck the boy's head, knocking him unconscious.

State Coroner Marvin Bay, who found Hambali's death to be a tragic misadventure, said the bleeding boy was rushed to KK Women's and Children's Hospital, where he died about two hours later of the head injury on April 24 this year.

Investigation officer Irina Ng told the court that the goalpost had a back bar which could enhance its stability. But the back bar had corroded by April this year.

The school had purchased the goalpost in 2014.

The back bar of a goalpost runs on the ground behind the goalkeeper, parallel to the crossbar.

Inspector Ng told the court that the back bar is an optional feature and it is not compulsory to have it.

In his findings, Coroner Bay said: "After the welded back bars had come off, the goalpost could be transported with students moving the goalpost, tilting down the sides of the goalpost from the usual 90-degree position, until it was almost parallel to the ground.

"Thereafter, the goalpost would be almost flat when they were moving it."

He also said that the trapezium-shaped sides of the affected goalpost had a tendency to swing inwards or outwards.

Following this tragedy, the Ministry of Education (MOE) has issued new safety guidelines mandating against the use of foldable goalposts.

Schools must ensure that they do not use them, and attach warning labels to the crossbars of approved goalposts that stand at 1.8m and above.

All football goalposts used in schools must also be anchored to the ground.

GMSS has also taken steps to display signs on the dangers of hanging, pushing or pulling on the goalposts.

Coroner Bay commended the ministry and the school for being proactive.

He added: "There is always a need to anticipate the possibility that students will use or misuse equipment in an unexpected, unorthodox or otherwise unsafe manner, and expose themselves to injury.

"Imbuing students and teachers with a keen sense of safety consciousness, along with close supervision during PE sessions, would be key to alleviating this risk of harm." 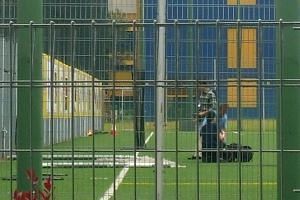 Hambali's parents were in court during yesterday's inquiry, and they listened intently to the proceedings.

His father, Mr Sumathi Abdul Hamid, 54, told The Straits Times that he thinks of his late son every day.

Choking back tears, the hospital housekeeper said: "We still keep all his things in a box, and we can't bear to throw them away.

"I visit his grave about twice a week to say a prayer for him. He was such a good boy, and all of us miss him very much."