The Ministry of Education (MOE) said schools have been informed of additional safety guidelines for the use of goalposts and will implement them fully by the end of the year.

Among other things, foldable goalposts are now banned at all schools here.

Physical education teachers and coaches welcomed the move, saying it could prevent another tragedy.

Yesterday, a coroner's inquiry ruled that Geylang Methodist School (Secondary) student Muhammad Hambali Sumathi's death in April had been a tragic misadventure. He was struck in the head by a foldable goalpost which fell on him. He had grabbed hold of the crossbar before it toppled.

Mr Desmund Khusnin, 44, who has coached football at primary and secondary schools for about four years, said the ban is timely. Foldable goalposts are lighter and may lift off the ground when children grab the crossbar, he said.

Schools now have to attach warning labels to crossbars of approved goalposts that are 1.8m high and above. All football goalposts used in schools must also be anchored to the ground, a measure that Mr Khusnin said is important.

Football NSW, the governing body for football and futsal in New South Wales, Australia, requires all portable goalposts weighing 28kg and heavier to be anchored down with sand or cement bags. They also have to come with yellow warning stickers. 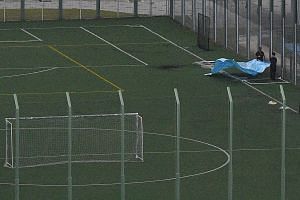 A PE teacher from a primary school in the West, who declined to be named, said it will mean some inconvenience. Foldable goalposts can be moved, allowing half the pitch to be used when there are fewer players, he said. His school has stopped using foldable goalposts since the MOE directive was issued, and may consider using lightweight, plastic pop-up goalposts instead.