Setting up a food outlet now requires firms to fill in up to 845 data fields on forms from different government agencies.

But from next year, applying for such licences is set to become simpler, faster and cheaper for businesses in the food and beverage (F&B) sector.

They will need to spend less time on the forms as there will be far fewer data fields to fill in, and pay less for the licensing fees. Also, their applications will be processed more quickly, said Senior Minister of State for Trade and Industry Chee Hong Tat yesterday.

Mr Chee underlined the benefits when he gave an update of the ongoing effort by his ministry's Pro-Enterprise Panel to review and streamline regulatory requirements for the F&B industry.

The review was announced earlier this year.

With the changes, firms will fill in only 200 data fields, and Mr Chee hopes the number can be reduced further to fewer than 100 data fields.

"I believe we can go even further in some cases where the application is more straightforward, to achieve a further reduction in the next phase of the review," he added. 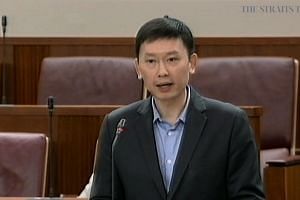 Red tape to be cut, licensing rules simplified in move to help businesses

The licensing fees for each applicant will also be slashed by more than $500. Businesses are charged varying fees, depending on how many licences they apply for as well as their business models and the size of their premises.

The time taken to process a standard application will be reduced from 42 days to 28 days.

In addition, businesses have to upload supporting documents only once, even when applying for licences from different agencies.

The team doing the regulatory review consists of staff from the Ministry of Trade and Industry, the Smart Nation and Digital Government Office, Government Technology Agency and the Public Service Division.

Mr Chee said the Government will work with the Restaurant Association of Singapore to test the new system and make further improvements before rolling it out to all users next year.

He was speaking at the association's Excellent Service Awards event at One Marina Boulevard.

In all, more than 2,400 people received awards for providing outstanding service. They included staff from such well-known brands as McDonald's and LiHo.

In his speech on the impending changes, Mr Chee said: "We must ensure that when we try to achieve one-stop service, our 'one-stop' should not become 'one more stop'."

He added: "What we have done is to relook the entire service journey from a company's perspective: from setting up the company to receiving the required licence approvals to commence operations."