SINGAPORE - The first national survey on dementia in Singapore has found that majority of people with the condition experience rejection, loneliness and shame, and feel less competent.

Three in four with the condition feel lonely and rejected, according to the survey conducted by Singapore Management University (SMU) and the Alzheimer's Disease Association (ADA).

About 56 per cent of respondents feel that people treat those with dementia as less competent, based on the findings released on Monday (April 29).

Nearly 30 per cent of caregivers feel embarrassed while caring for their loved ones with dementia in public. But 90 per cent of them do not think people with the condition are less competent.

More than 5,600 people across Singapore, including those with dementia, caregivers and the public, participated in the study. Of the respondents, 32 had dementia,  1,156 were caregivers and 4,491  were not related to dementia patients.

The study was conducted in January this year over five weeks.

In terms of stigma levels, the results show that, unsurprisingly, those who hold no connection to dementia have the highest stigmatic attitude, according to ADA.

This is followed closely by the people with dementia, with one in two feeling ashamed of their condition, citing stigma as the main reason.

Among the public, men are significantly more stigmatic than women. Baby Boomers (aged 70 and above) are the most biased, followed by millennials (aged 21 to 39) and then Generation X (age 40 to 69). 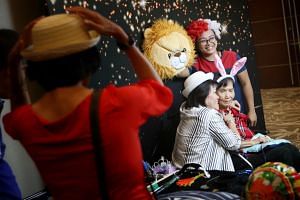 An app to help unlock memories of persons with dementia

Dementia is an umbrella term that describes a wide range of symptoms associated with mental decline such as memory loss and decline in reasoning and judgment. Alzheimer's disease is the most common type of dementia.

One in 10 people aged above 60 in Singapore has dementia, according to the Institute of Mental Health (IMH), with the condition affecting half of those above the age of 85. This translates to an estimated 82,000 cases locally in 2018, according to IMH.

The study reinforced the need for more dementia education and awareness. More than half or 57 per cent of the public rate themselves low in dementia knowledge and feel uncomfortable interacting with people with dementia, with almost 44 per cent feeling frustrated about not knowing how to help them.

However, nearly eight in 10 of respondents want to do more to improve the lives of people with dementia. A total of 73 per cent think that this group can still enjoy life and that more can be done to improve their quality of life.

"We need to strive towards changing the mindset of society and break stereotypes. All of us should not focus on their deficits, but on what they can still do with their remaining abilities. It's important to recognise that they can still lead purposeful and meaningful lives," said Mr Foo.

Working closely with ADA to develop the survey, SMU senior lecturer of statistics Rosie Ching and her 99 undergraduates collated 5,679 responses across Singapore as part of a statistics module.

Ms Ching said: "It has exposed us all to a problem largely not openly discussed nor well understood but which exerts one of the most onerous burdens in society. My students and I are privileged to have worked with ADA in generating statistics which will spark greater understanding, change and improvement."