These are some of the memories that Singapore residents with dementia could soon be reminded of, with help from a digital app developed by a group of museums in England, under an agreement inked on Monday (April 29).

The My House of Memories app - a key part of a dementia awareness training programme - is designed to be easy to use, with moving icons and animations used to reorientate persons with dementia. Built by National Museums Liverpool, it stores visuals of hundreds of social history objects from museum collections to elicit memories in dementia patients and coax them to share their past with their caregivers.

Likewise, the upcoming Singapore version of the app will feature curated objects and photographs from the Republic's National Collection, which is managed by the National Heritage Board (NHB).

On Monday (April 29), The British Council, NHB and National Museums Liverpool signed a Memorandum of Understanding at Eden Hall, the official residence of the British High Commissioner to Singapore, to introduce the House of Memories programme here.

"NHB is working on making our museums and heritage more accessible to the underserved communities, including seniors and persons with dementia," NHB chief executive Chang Hwee Nee said.

"Programmes such as House of Memories can help us achieve this as it allows more to tap into and enjoy our National Collection, even using the pieces within as conversation starters for reminiscence, sharing and bonding," she added. 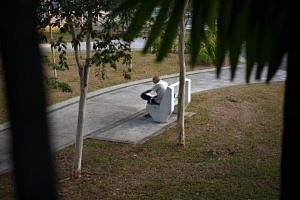 3 in 4 people with dementia feel lonely and rejected: Survey

The app will then be available in Malay, Mandarin and Tamil in a few years.

The announcement comes as Singapore's first national survey on dementia, conducted by Singapore Management University and the Alzheimer's Disease Association, was released earlier on Monday(Apr 29). It found that the majority of dementia patients feel rejected, lonely and ashamed.

National Museums Liverpool's Director of Engagement Carol Rogers said: "The app will help trigger memories and enable the user to 'visit' the museums and connect with their heritage from the comfort of their own home or care home."

With over 12,000 people using the app in Britain and the United States, Ms Rogers has come across success stories where the app has helped to improve patients' well-being.

"A staff from a Liverpool dementia care home told us about an elderly who was disheveled and refused to take a bath as he was frightened to get into the shower.

"After a training session, the staff took back with her some objects from the 1940s, which included a piece of carbolic soap- a pungent-smelling antiseptic soap. When the patient smelled the soap, it reminded him about bath time as a child. From that moment, the staff got him back into the bath. They got him to wash and clean himself."

The House of Memories Singapore app is part of NHB's Silver Hubs initiative, which is aimed at making museums and heritage institutions more accessible to seniors.

British High Commissioner to Singapore Scott Wightman described the collaboration as "a great example of the SG-UK Partnership for the Future". Launched in January by Foreign Minister Vivian Balakrishnan and his British counterpart Jeremy Hunt, the tie-up aims to deepen ties between both countries in a range of areas, including culture.