AMSTERDAM - Singapore and the Netherlands have a longstanding friendship that goes back to Singapore's early independence, and they continue to share strong economic ties and a similar outlook on the world, said President Halimah Yacob on Wednesday (Nov 21).

This includes a "common commitment" for multilateralism, free trade and the rule of law, said Madam Halimah, at a state banquet hosted by King Willem-Alexander in the Royal Palace of Amsterdam. The President is on a five-day state visit to the Netherlands, the first by a Singapore head of state to the country.

"We are both outward-looking countries with open economies and world-class ports and airports," she said. "Trade is our lifeblood, and our two countries are the gateways to our respective regions."

"Today, there are more than 1,600 Dutch companies in Singapore," she said.

The state banquet was attended by 190 people, including King Willem-Alexander, Queen Maxima, and former Queen Beatrix.

King Willem-Alexander said the Netherlands cherished its bond with Singapore, "a country that isn't afraid to embrace the future".

"During your stay in our country, you will be visiting various centres of knowledge and creativity," he said, and quipped: "You'll be able to learn more about the Dutch approach - an approach that you may find a bit unpolished and unconventional."

Ceremonial welcome for President Halimah in the Netherlands

Madam Halimah said: "Singapore is the top overseas investment destination for the Netherlands in Southeast Asia, with total investments amounting to more than €60 billion (S$94 billion). The Netherlands is Singapore's fourth largest global investor and third largest trading partner in the European Union." 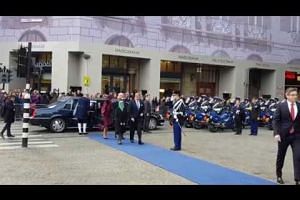 Likewise, she added, Singapore has more than €12 billion worth of investments in the Netherlands and the EU-Singapore Free Trade Agreement signed last month "will further deepen economic relations".

Madam Halimah and her husband, Mr Mohamed Abdullah Alhabshee, arrived in Amsterdam on Tuesday, and were formally welcomed by King Willem-Alexander and Queen Maxima on Wednesday morning.

The welcome ceremony took place in Amsterdam's historic Dam Square, just in front of the Royal Palace. There, Madam Halimah and King Willem-Alexander inspected the guard of honour.

She also laid a wreath at the foot of the 22m-high National Monument to honour the sacrifices of soldiers and civilians who died in wars.

Apart from Amsterdam, Madam Halimah will also visit The Hague, where the Dutch government sits, as well as the cities of Rotterdam and Eindhoven.