SINGAPORE - The authorities intend to make public the findings of environmental impact assessments, or EIAs, unless there are specific reasons - like security considerations - to maintain confidentiality, said Second Minister for National Development Desmond Lee on Monday (Feb 11).

This is the first time security considerations have been cited as a factor for withholding the results of environmental studies.

Mr Lee was responding to Mr Louis Ng (Nee Soon GRC), who asked if the authorities would consider making EIAs mandatory for all construction works near national parks or nature reserves, as well as publicly available.

It comes in the wake of disputes over the Housing Board's conclusion that forests in Tengah, which is near a military training ground, were of "low conservation significance".

But ecologists consider the forests there an important vegetation node that allows wildlife to move from the Western Catchment to the Central Catchment Nature Reserve. Common animals such as wild boars and monitor lizards thrive in the Tengah forests.

The HDB, which launched 1,620 flats there last November, released the key findings by Aecom, an independent consultant in October.

But it did not release the full report despite multiple requests from environmental groups. 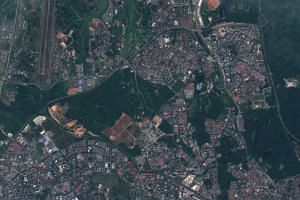 Measures in place to reduce impact on environment

Help for Tengah wildlife to find a new home

On Monday, Mr Ng asked if the authorities could release the full report on Tengah without the sensitive data, to address the disputed findings about the environmental impact of clearing secondary forests for Singapore's first "forest town" for public housing.

Mr Lee replied: "For Tengah, the findings of the Environmental Baseline Study were shared with the public thorough the media in October last year, and we will also be engaging the nature groups to share with them the details."

He did not say when the engagement sessions would start.

"As you know, Tengah is and remains a military training ground," he added.

Earlier, Mr Lee said development projects near sensitive areas, including nature reserves and marine and coastal areas, are required to undergo an in-depth consultation with the relevant agencies to discuss the scope of works, possible environmental impact, and corresponding mitigating measures.

"If the potential environmental impact of a project is assessed to be significant, we will require the project developer to conduct further environmental studies to thoroughly assess the nature and magnitude of the impact, and to implement more extensive mitigating measures to address them," he said.

There has been tension over other environmental studies.

Nature groups had pointed to the lack of clarity of terms used and lack of consideration of the Singapore context in two separate EIA reports released months apart in 2016.

The first looked at the potential impact of tunnelling through the Central Catchment Nature Reserve to build the Cross Island MRT Line, while the second was on the impact the Mandai hub of wildlife parks would have on wildlife and environment.

Both cases also raised the question of how transparent such reports should be. Both the Land Transport Authority and Mandai Park Holdings made their respective EIAs available, but the LTA did so only after members of the public complained about limited access to the document.