SINGAPORE - Lawyer Murali Pillai, who will represent the People's Action Party (PAP) in the May 7 polls in Bukit Batok constituency, said he was glad the by-election had been called.

"I welcome the announcement," he said hours after the writ of election was issued on Wednesday. "We are ready for the campaign."

Speaking to The Straits Times after visiting homes in the Bukit Batok single-member constituency (SMC), he said: "Obviously, it's something very important for Bukit Batok residents because they have to decide who should represent them in Parliament, represent their concerns and also look into issues that concern them.

"It is an extremely important decision, especially in this gloomy economic climate." 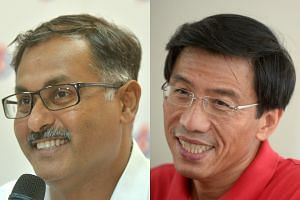 In the past few weeks, since his introduction as the PAP's candidate on March 21, Mr Murali said he had been speaking to residents to understand their concerns and aspirations.

In the next few days, he will announce his plans for the constituency based on what he has learnt from these conversations.

The plans will cover such issues as help for needy families in the SMC, support for elderly residents, and also the sprucing up of the mature estate by improving connectivity between precincts, for instance.

Some residents, especially those living in the rental blocks, had also expressed concerns about the slowing economy and how it might affect their job prospects, said Mr Murali.

"We need to make sure that those who are affected are given adequate help and I hope to address their needs."

One-room to three-room HDB flats make up about 32 per cent of housing in the constituency.

On his preparations, Mr Murali said he would continue to meet residents and listen to them.

"This is not a box-ticking exercise in terms of covering the blocks. From my perspective we need to have conversations with the residents, ask them what their concerns and aspirations are," he said.