SINGAPORE - The labour movement will focus on five areas to support workers, including pushing for better wages, as Singapore pushes ahead with restructuring efforts to transform its economy, said labour chief Ng Chee Meng on Tuesday (July 31).

In his first National Day message as NTUC secretary-general, he described workers as "the core of our success", noting that Singapore's economy had grown steadily this year, building on the 3.6 per cent growth last year.

Setting out the five areas, he said one of them is to help workers get better pay and welfare, as well as better work prospects.

The National Trades Union Congress will also roll out more progressive wage models (PWM) for low-wage workers, which specifies higher pay for workers as they upgrade their skills, he added.

Mr Ng, who is Minister in the Prime Minister's Office, said lift technicians will be the next group to benefit from this wage ladder. He added that the labour movement will also explore implementing PWMs in other sectors.

Another area of focus is older workers - NTUC will work on a review of the retirement age of 62, and strengthen re-employment guidelines for such workers.

This is in line with the work of a tripartite work group, set up by Manpower Minister Josephine Teo, to look into issues faced by older workers, including retirement adequacy. 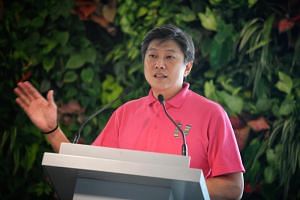 Lastly, it will focus on helping workers cope with the cost of living through NTUC's social enterprises, he added.

Mr Ng said total employment has increased, even though retrenchment and unemployment rates crept up slightly in the April to June period.

Total employment, excluding foreign domestic workers, went up by 7,100, a sharp rise from the growth of 400 in the first quarter.

With a stable political environment here, as well as a strong tripartite partnership, a fair and transparent legal system, and a hardworking workforce, businesses will continue to thrive, Mr Ng said.

Citing the rapid technological advancements and geopolitical shifts which are disrupting economies around the world, Mr Ng said: "How fast and how well we adapt, innovate and transform will decide Singapore's fortunes and Singaporeans' living standards."

He added: "The labour movement will do all we can to help. We ask our workers to press on and gear up their skills. We need to train up to keep up, skill up to move up."