If we take a step back and adopt a strategic perspective of global events, we can see that China is being harassed on several fronts by the United States. There are commercial pressures; diplomatic manoeuvres to block the progress of infrastructure projects like the Belt and Road Initiative; and at the technological level, calls for a boycott or restrictions against the Chinese technological giant Huawei.

These are some of the current modalities of strategic competition between great powers, without involving the direct use of hard or military power, which we could well consider a Cold War 2.0.

In some ways, the advances of the US government against Huawei and the development of events in the last few months are not surprising.

In December, the company's chief financial officer Meng Wanzhou, the daughter of the founder of the company, was arrested in Canada on accusations of espionage. Since then, calls for boycotts and diplomatic pressure to annul Huawei's advances in several countries have followed.

Huawei is the flagship Chinese telecommunications equipment maker, spearheading the Chinese technological advance. This onslaught against Huawei is not a coincidence. While formally not having direct links with the Chinese government, Huawei has a prominent role in the Chinese strategic technological plan "Made in China 2025" because of its development and implementation of 5G networks, a key part of the plan estimated to be available soon.

The strategic approach is to change the Chinese productive matrix towards a "high-tech" economy, of design and innovation, to position China in the forefront in the technologically advanced sectors of the modern economy, such as in the areas of artificial intelligence, biotechnology, robotics, automation, the Internet of Things, telecommunications, software, renewable energies and 5G.

Washington does not feel comfortable with these Chinese advances.

The Eurasia Group consulting firm argues that the installation of 5G networks will involve one of the biggest changes in our time, comparing its appearance to major breaks in the technological history, such as electricity. Some specialists, websites and the press have called it a "Sputnik" moment, comparing the potential impact of competition for the development of 5G technologies to the space race in the Cold War at the time.

5G will allow the use of faster network data, as well as the widespread and coordinated use of advanced technologies such as artificial intelligence, the Internet of Things, smart cities, automation, improvements in health, and in the military field.

The US has put pressure on several of its allies (Australia, New Zealand, Germany, Britain and Canada, to name some) to block Huawei's advances in services and investments in their countries, while restricting the purchase of Huawei's products and services on North American soil.

While it is true that several countries could give in to the pressure from Washington to "encircle" Huawei and restrict its services and products, it is equally the case that many other countries, especially the many that have China as their main trading partner, in addition to all the pleiad of emerging and developing countries, are also being seduced by the economic possibilities, and in this specific case, technology offered by China and its companies. What it would imply is a worldwide competition between American diplomatic muscle and Chinese sweet money.

Indeed, commercially, the progress of Huawei into the top rungs of tech companies is remarkable, due to its production methods and its business model having surpassed, for example, Apple among the largest companies that sell mobile phones, being only second to Samsung.

But what about free trade and competition, you may ask.

It seems that in the global economic game, the US throws the chessboard away when it loses, and uses its geopolitical muscle, without any problem, following Groucho's Marx doctrine: "Those are my principles, and if you don't like them... well, I have others."

The fears about Huawei's technology are hiding a power struggle, a hegemonic dispute over technology. So far, the accusations of espionage against this corporation perhaps may be valid in a theoretical sense, but unprovable by facts. What is left, then, is mere speculation.

The accusations by the US against Huawei, about the alleged "threat of espionage", are unbelievable, and hypocritical in some sense, and marked by a double standard.

Who represents the threat? Is the same US that nowadays "advises" its allies and other countries to "protect" themselves against the "threat" of Huawei's espionage in favour of its government, the same country that spied on its own allies in a wicked way, if we remember the cases that Julian Assange and Edward Snowden brought to light? 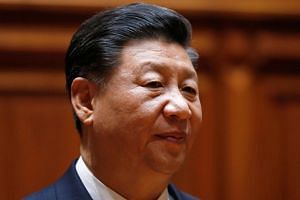 China’s Xi to visit Europe on trip to boost ties, garner support for Belt and Road

We can also highlight the Cambridge Analytica scandal, which showed the unholy relations between the big technological "independent" corporations like Facebook and Google with the political power in the West.

Technological competition is another chessboard of this new multi-level and multi-dimensional 21st-century Great Game, where the great actors move their pieces.

5G is the focal point for a global rush to dominate the next wave of technological development - a race many policymakers worry the US is already losing, and that's why they act in this aggressive way.

The strategic competition for advanced, high technologies such as 5G, and innovations in the fourth industrial revolution, will determine which powers get to stand on the "podium" of the 21st century.

The technological new Cold War between the two largest economies and powers in the world shows no signs of diminishing, nor the strategic competition.

Who will win this Great Game on the chessboard? The patience, precaution and forecast of the game of Go, or the strong bets and bluffs of poker?

The geostrategic chessboard is already deployed. Players already have their cards in hand, and have moved their tokens. Prestige is to come.

• Juan Martin Gonzalez Cabanas is a senior researcher and analyst at the Dossier Geopolitico, an Argentina-based think-tank offering a South American perspective on global issues.