China supports Huawei's lawsuit against the United States and backs the technology giant for refusing to be a "silent lamb".

It also said that it will do everything to defend the interests of Chinese companies and citizens.

China's top diplomat made it clear yesterday that Huawei is under attack and that the recent actions against it were "not simply a judicial matter, but deliberate political suppression".

"We support related companies and individuals to take legal actions to protect their rights and interests, and not be a 'silent lamb'," Foreign Minister Wang Yi said on the sidelines of China's annual parliamentary meetings.

Huawei filed a suit against the US government on Wednesday alleging that a law which barred federal agencies and their contractors from using its equipment and services was unconstitutional.

It faces legal issues on another front as well: Chief financial officer Meng Wanzhou faces extradition from Canada to the US on possible charges of flouting Iran sanctions, a charge her lawyers have argued were politically motivated.

Washington has been urging its allies to keep Huawei at arm's length for fear that it will spy on behalf of the Chinese Communist Party. The Shenzhen-based company is the world's leading telecommunications equipment supplier and has the second-largest market share worldwide for mobile phones. 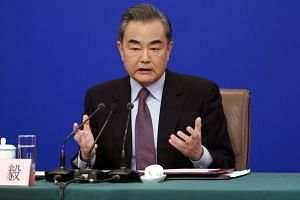 China to fight ‘for legitimate rights’ of Huawei and others, says foreign minister Wang Yi

Yesterday, Mr Wang said countries have a right to pursue their own technological development, and called for a fair and competitive market for businesses.

He also urged greater cooperation rather than competition with the US, adding that Beijing hopes Washington will "abandon its zero-sum thinking", while pointing to the more than US$630 billion (S$857 billion) worth of bilateral trade chalked up last year.

Some people want China and the US to "decouple" economically, he said, calling it "wishful thinking". The world's two biggest economies are already inseparable, he said.

Trade talks have made substantial progress, said Mr Wang, pointing out it shows that a commitment to consultation and mutual respect is the key to solving problems.

Besides the sizeable trade flows between the two countries, two-way investment stock reached US$240 billion last year, and there were more than five million visitors both ways, Mr Wang said, adding that nearly all major US corporations have operations in China.

In a wide-ranging media conference that lasted nearly two hours, he was also asked about China's relations with Russia, Japan, India, Europe, Africa and North Korea.

On Russia, he said both countries have found a way to get along: They enjoy mutual political trust, economic cooperation and mutual support in international affairs.

"We have become a model of relations between major powers today," said Mr Wang.

He had similar words about China's strategic relationship with India, stressing the similarities between the two Asian giants.

"As two ancient civilisations with a population of 2.7 billion, as two major developing countries and two emerging economies, we should partner to mutually fulfil our dreams and work together to revitalise Asia," he said.

SEE WORLD:  Goal is to lift 10m people out of poverty this year

A version of this article appeared in the print edition of The Straits Times on March 09, 2019, with the headline 'China backs Huawei's suit against US and refusal to be 'silent lamb''. Subscribe
Topics:
More
Whatsapp Linkedin FB Messenger Telegram Reddit WeChat Pinterest Print Purchase Article Copy permalink