Kentucky bourbon Colonel E.H. Taylor 4 Grain Bottled In Bond Aged 12 Years is the Whisky of the Year, according to the renowned English whisky writer.

Last year, it was Booker's Rye 13 Year Old that took the title.

This is the 15th edition of the prominent whisky expert's guide, which ranks whiskies from various key regions according to their style, age and other factors.

Produced by Kentucky-based Buffalo Trace Distillery, the winning bourbon is from its line of small batch releases that draws inspiration from Colonel Edmund Haynes Taylor Jr's time as a grain trader during the American Civil War.

Made using a mash bill of corn, rye, wheat and malted barley - the four grains of the name - and aged for 12 years, it was praised by Murray for its "sheer, undiluted beauty". 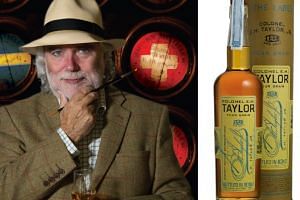 This bourbon is the best whiskey of 2017, according to Whisky Bible

Topping his list typically sends bottles flying off the shelves and inflates prices of the prized spirit.

Mr Joe Alessandroni, "spirits evangelist" from spirits distributor Proof & Company, feels that such "best of" lists can bring attention to great spirits that most people may not have tried and serve as a resource for consumers to begin exploring a category or brand.

"For example, awards such as this have been a major driver of the boom in Japanese whiskies over the past couple of years, but the downside for consumers is that the price of these award-winning bottles gets artificially inflated to the point of ridiculousness," he says.

He says the best way to find whiskies to enjoy at reasonable prices is to "develop a relationship with the experts at your local bottle shop".

That said, you may still be able to get your hands on some of the award-winning bottles here.

While expressions from the Colonel E.H. Taylor line are part of the portfolio of Robertson Quay whisky retailer La Maison Du Whisky (LMDW) Singapore, the 4 Grain depends on allocation and is currently unavailable.

The second-placed Redbreast Aged 21 Years is available at LMDW and The Proof Flat by EC Proof in Hongkong Street for $320.

The regular Glen Grant 18 Year Old, however, is already there at $28 a glass.

An American whiskey topping the list again is also significant, considering the last time a Scotch whisky won was when Glenmorangie Ealanta took the top spot in 2013.

Mr Alessandroni says this is an exciting time for American whiskey, "as new distilleries open and established brands continue to innovate with new mash bills and modern techniques".

"It's great to see bourbon getting well-deserved attention and recognition from a global audience."

Quality American whiskeys you can get in Singapore

While the top three whiskies on Jim Murray's Whisky Bible 2018 awards list will probably be harder to acquire, here are some other options for quality American whiskies you can get in Singapore by the bottle.

Mr Philip Bischoff, bar manager at award-winning bar Manhattan at The Regent Singapore, which has the Manhattan American Whiskey Embassy. Here are bourbons and ryes from its collection.