In 2016, WWE superstar Shinsuke Nakamura shocked the wrestling world when he jumped ship from New Japan Pro-Wrestling (NJPW) to WWE in the United States.

Nakamura’s wrestling talent was apparent from a young age. The captain of his university wrestling team, Nakamura tried his hand at mixed martial arts upon graduating, amassing a record of three wins, one loss and one that ended in a no contest.

At the same time, he impressed officials in NJPW, soon winning the promotion’s most prestigious prize in 2003, the IWGP Heavyweight championship when he was just 23, a record that still stands today.

In Singapore last week to promote a WWE live event here on June 27, Nakamura, who's nicknamed the "King of Strong Style" was in fine form, chatting to media and fans alike.

He will headline the event and face Seth Rollins for the Universal Championship at the Singapore Indoor Stadium. “It is a such a honour as an Asian to main event the show in Singapore," he said.

If all goes well, he will face Rollins on WWE television in the coming months. "It all depends on the matches in Singapore and in Tokyo. A lot of people want me to come back to singles wrestling. Hopefully, I will have a great match against Seth." 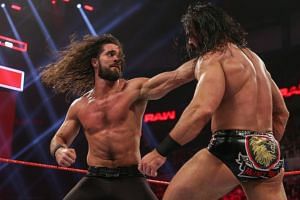 Nakamura, who is now 39, recently starred in a Nissin Cup Noodle television advertisement for the Japanese market. But wrestling is still very much his focus.

"I want to wrestle at least five more years. I'm 39 now. (Former MLB) baseball player Ichiro Suzuki retired at 45 and he was such an influence for Japanese sportsmen, especially those who lived in other countries. And so I need to wrestle until I'm 45 years old," he mused.

He wants to face WWE’s top dog, Roman Reigns, one day too. “Some people say his wrestling is simple but I like ‘simple’ too,” he said with a cheeky grin.

All in good time, Nakamura.

WWE Singapore takes place at the Singapore Indoor Stadium on June 27. Tickets can be purchased from www.sportshubtix.sg

Watch WWE Raw and SmackDown, live from the US on Tuesday and Wednesday, 8am respectively on StarHub Ch 202.