American entertainment website Variety, quoting sources in a report on Monday, reported that members Suga, J-Hope, Rap Monster, Jin, Jimin, V and Jungkook will present an award at the live show at Staples Center in Los Angeles. They will, however, not be performing.

Variety did not reveal details of the award in its report.

The K-pop stars are nominated in the best recording package category for their album Love Yourself: Tear, which was released in May last year.

The artwork was directed by HuskyFox's Doohee Lee.

Love Yourself: Tear is up against four other albums: Mitski's Be the Cowboy, St Vincent's Masseducation, The Chairman's The Offering and Foxhole's Well Kept Thing.

BTS, which has seen immense global success in recent years, charmed tens of thousands of Singapore fans last month during their sold-out show at the National Stadium. 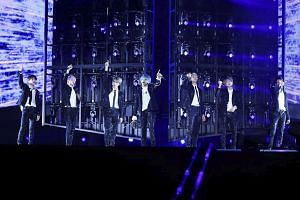 BTS were a hit on Jimmy Fallon's Show

The group, which made their debut in 2013, are known for their blend of hip-hop with rock and pop elements.

Last year, they became the first K-pop album to reach No. 1 on the Billboard 200 albums chart with Love Yourself: Tear.

Sunday's Grammys will be hosted by American singer and songwriter Alicia Keys.

Keys, a 15-time Grammys winner, replaces James Corden, the British late-night show comedian who has hosted the awards the past two years.

According to Variety, pop star Taylor Swift and band Maroon 5 will be giving the awards show a miss this year.

Swift's Reputation has been nominated for best pop vocal album, while Maroon 5 is up for best pop duo/ group performance for Girls Like You with Cardi B.