Hong Kong actor Benz Hui is reportedly seeking to become a Singapore citizen after he moved into a Yishun home.

According to the EdgeProp portal, an agent said the Ip Man star and his wife Cissy Wang checked out The Oliv in Balmoral Road, Bishopsgate Residences, Nouvel 18 in Anderson Road and South Beach Residences in Beach Road.

The couple were said to be willing to consider homes costing $5 million to $10 million.

It is not known if the current pro-democracy protests in Hong Kong prompted Yen to check out the property market here for his family use or investment.

New York-based bank Goldman Sachs this week estimated that investors have diverted up to US$4 billion (S$5.5 billion) from Hong Kong to Singapore.

Singapore property developers have targeted buyers in Hong Kong, with a sales event there in September featuring developers like CapitaLand, GuocoLand and Bukit Sembawang Estates.

Hong Kong buyers snapped up 47 and 78 non-landed homes in Singapore in 2018 and 2017 respectively, research from OrangeTee & Tie indicates. 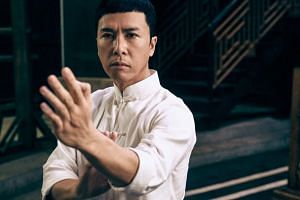 Donnie Yen, who is set to shine again in Ip Man 4, once had only $18 to his name

Then, media reports said Wang was eyeing investments in Hong Kong shops and office buildings but the cooling measures there put paid to that goal.

Recently, Yen posted online his gratitude to his wife after 16 years of marriage. They have two children while he has another son from his first marriage.

Was his Singapore visit linked to yet another intention to reward Wang with property?

Yen has benefited from the box-office success of the Ip Man franchise that started in 2008, with the fourth, and last, instalment slated for a December release.

The franchise tracks the life of the man who trained Bruce Lee.