SINGAPORE (BLOOMBERG) - Sentosa Cove, a residential enclave nestled on an island off the coast of Singapore, is quiet at the best of times. On a weekday, its frangipani-lined streets are mostly devoid of life, save the odd domestic helper taking her four-legged charge out for a walk.

The stillness, however, belies the real estate shuffling taking place behind the scenes. Property listings here have been rising. But unless you're buying, there's no cause for celebration: sellers are stomaching losses as steep as 40 per cent. Average prices are down almost 30 per cent from their 2011 highs, a far more severe slump than in prime central London areas reeling from Brexit.

As luxury real estate markets boomed across Asia-Pacific over the past decade - from Hong Kong's famed Peak to the seaside mansions of Sydney - Sentosa Cove stands out as a rare cautionary tale about the perils of international property speculation. The hot money from a commodities frenzy that peaked about seven years ago has fizzled, and millionaires' preferences have shifted toward other areas on Singapore's mainland.

And now, after years of predominantly loss-making transactions, the enclave on Sentosa island faces yet another blow, this time from the government's decision in July to further raise stamp duties.

"Loss-making deals continue to plague the market," said Christine Li, Cushman & Wakefield's head of research for Singapore. "The recent cooling measures, coupled with the looming uncertainties arising from interest-rate hikes and trade tensions, will weigh on investor appetite in the near term."

Private-home sales tumbled 64 per cent in August to the least in six months as government cooling measures took effect, data released earlier this week from the Urban Redevelopment Authority showed.

What was previously Sentosa Cove's main strength has lately become a liability. The area is the only place in Singapore where foreigners can buy a landed house, increasing its allure to overseas buyers, who accounted for a third of luxury purchases in Singapore last year. But with stamp duties doubling to 20 per cent since 2011 for foreign buyers compared with just 3 per cent for Singaporeans, the waterfront oasis is suffering. 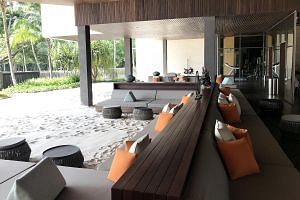 'A sledgehammer to kill a fly': Experts surprised by 'severity' of new property curbs

Singaporeans, meanwhile, prefer to buy landed property on the mainland, which is freehold, compared to Sentosa, which is leasehold.

Constructed on reclaimed land, Sentosa Cove is home to more than 2,000 residences, a mix of private houses and condominium apartments. Frequently billed as Singapore's playground for the rich and famous (in 2012, Australian mining magnate Gina Rinehart splashed out $57 million on two units at Seven Palms, next to Tanjong beach), the enclave also includes a golf course, marina, man-made canals with private boat berths, and a strip of upmarket restaurants and a gourmet deli.

One of its newer condominiums, Cape Royale, scored a cameo in summer blockbuster movie Crazy Rich Asians. And Sentosa Island - a Malay word meaning "peace and tranquility" - had its 15 minutes of fame earlier this year when it hosted the meeting between US President Donald Trump and North Korean dictator Kim Jong Un.

Prices began falling in Sentosa Cove in 2013 following two rounds of property cooling measures in January and June of that year. Landed-home prices are at their lowest since 2009, according to data compiled by CBRE Group Inc.

Values have plummeted to the point where further declines may be limited, said Cushman & Wakefield's Li. But deep-pocketed international buyers, with plenty of luxury markets to choose from, are playing a patient game.

"I have a few Russian investors that are interested in buying, they want to enjoy the island life, but they're waiting for the right price," said Chandran V R, managing director of Cosmopolitan Real Estate Pte. "Some bungalows have been on the market for four, five years."

Cosmopolitan was involved in an $11 million transaction last year where the seller was a businessman from the Middle East. The seller lost about $3 million on the deal, "but he had a willing buyer and he was being realistic about the situation," Chandran said.

A penthouse at The Oceanfront sold for $7.2 million in April, three years after it was first put on the market, the Straits Times reported earlier this month, citing people it didn't identify. The property last changed hands in 2007 for $9.33 million. The British owner of an apartment at Seven Palms, meanwhile, is asking $12 million, according to the newspaper report. The 4,822-square-foot unit cost $16 million in 2010.

While none of the six sales in Sentosa Cove since the government's July 5 curbs have been done at a loss, according to Cushman, owners are still looking to exit. PropertyGuru Group says the number of for-sale listings on the island is up about 7 per cent from a year ago.

"The new measures will affect the entire residential market," said Desmond Sim, head of research for Singapore at CBRE. "Sentosa, because of its high ticket size, may fall further down the pecking order."