Manpower Minister Josephine Teo explained yesterday in Parliament why she is wary of making a sudden change in the policy on the age that Central Provident Fund (CPF) members can automatically receive monthly payouts from their retirement account.

This is partly because members have been told for years that they can activate the payouts any time from 65 and payouts start when they instruct the CPF.

"So, this has been the longstanding instruction," she said.

"Every time there is a change, it takes a long while for people to get used to it."

She suggested focusing on improving communication for the policy as it stands instead.

"If we keep to this consistent line, there is less risk of further confusing," she added in her reply to Mr Lim Biow Chuan (Mountbatten) and Mr Png Eng Huat (Hougang).

Mr Lim had expressed concern that the number of members who did not activate their payouts by 70 is not small, and asked if the payouts could start automatically at 65.

Mrs Teo replied that she had given serious thought to it but said, among other things, that the CPF Board cannot do this and deprive members of the benefits of keeping their money in the CPF.

She conceded that the CPF Board could do a better job of keeping members up to speed on policy issues. "There is much room for improvement in the way (the board) communicates key issues like starting payouts." She was referring to the recent confusion among some CPF members over the age at which they can start receiving monthly payouts.

Social media posts of a CPF letter that advised the recipient about his payout options on turning 65 led some people to mistakenly conclude the payout age had been raised to 70. 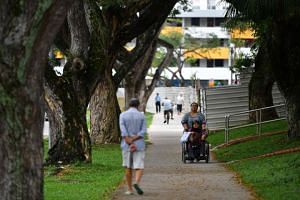 CPF contribution rate for workers above 55 should be raised: PAP Seniors Group

Others thought that if they did not apply to start receiving payouts at age 65, the next time they could do so would be at 70 years old.

It led to at least nine MPs asking for, among other things, to allow members to automatically receive their payouts at age 65.

Mrs Teo, in her reply, stressed that there will be no change in the policy: CPF members can continue to choose to start monthly payouts at 65, or defer them to any time between 65 and 70.

She assured the House that the CPF Board will take steps to improve communication, including reviewing letters sent to those nearing their payout eligibility age, to prevent the kind of misunderstanding that sparked the recent confusion.

She also said that from this year, all members reaching their eligibility payout age can attend a CPF Retirement Planning Service, a face-to-face personal service.

In her reply to Mr Liang Eng Hwa (Holland-Bukit Timah GRC), she encouraged members to visit CPF service centres across the island to get customised guidance.

Her ministry, which oversees the CPF Board, will also work with other agencies such as the Social Service Offices and Silver Generation Office.

Mrs Teo said there was no advantage for the CPF Board or the Government to want members to defer payouts beyond 65. In fact, members enjoy "tangible benefits" when payouts start later, like higher interest.

She noted that for each year payouts are deferred, a member's CPF savings will earn risk-free interest of up to 6 per cent, well above market rates.

So, members tend to defer their payouts, especially if they have other savings to draw on that are earning low interest or if they are still working.

Revisit your CPF options to get the best out of them

Mrs Teo said that in the past, some Retirement Sum Scheme (RSS) members had their savings in their CPF accounts until they died, which "is unsatisfactory".

That led to a new rule last year stipulating that payouts cannot be deferred past 70, for members turning 70 from 2018.

The minister said that about 60 per cent of RSS members who reached their eligibility age in 2017 did not activate their payouts. Even when they reached 70, about half did not ask to start their payouts.

Mrs Teo said some of them may be keeping their savings in the CPF because they have no need for the money or want to earn higher interest. Others, however, may not know that they can start their payouts earlier and so did not instruct the CPF Board.

CPF members can start retirement payouts any time from age 65