Fees cover regulatory costs, and deposits are for specific situations like settling fines

Security deposits and licensing fees the Government collects from bike-sharing companies cannot be used to pay their debts to users and employees after their licences are revoked, said Senior Minister of State for Transport Lam Pin Min in Parliament yesterday.

The fees are to cover regulatory costs so that they are not passed on to taxpayers, while the deposits are for specific situations like settling unpaid fines, he added.

A licensing rule was introduced last year. At a cost of $60 per bike - comprising a $30 licence fee and a $30 security deposit - Mobike had to pay $1.5 million in fees for its fleet of 25,000 two-wheelers. The licence is valid for two years.

The authorities, however, are "closely monitoring the situation" to see if more can be done to protect the employees and customers of such firms, a suggestion made by Nominated MP Walter Theseira.

Associate Professor Theseira had asked whether the Government considers - as part of the licensing process - whether a bike-sharing operator can meet its financial obligations to staff, vendors and users.

He had also asked whether any monies from fees paid to the Government are available for claims by these parties and, if so, how claims are determined.

Last week Chinese bike-sharing firm ofo's licence was suspended, for failing to meet regulations such as introducing a QR code-based parking system that would allow its bicycles to be parked only within specified areas. The firm is reported to have laid off its entire operations team without compensation last month, and is also said to owe vendors more than $700,000. 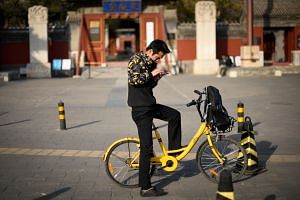 Dr Lam said vendors, companies, employees and users who are owed money by operators who lost their licences can seek redress through the civil courts. "The employees can also approach the Tripartite Alliance for Dispute Management (TADM) for help to resolve their salary disputes," he added.

Three ofo employees have filed claims with TADM since last December for the reimbursement of expenses, the Manpower Ministry told The Straits Times last month.

Dr Lam also said situations where the security deposit can be used are listed in the Parking Places Act, and these include serving as surety for an operator's compliance with licence conditions, and recovering the costs of removing and disposing of bicycles should the operator fail to do so after its licence is cancelled.

He added that the Land Transport Authority (LTA) will not make a claim on the deposit should these circumstances not arise.

In March last year, it was announced that bike-sharing companies here would have to be licensed, as part of efforts to curb indiscriminate parking. Both oBike and ShareBikeSG later ceased operations, citing difficulty in complying with the new regime.

Last week, it was announced that two firms - Moov Mobility and Ywise Circle - have applied to operate bike-sharing services here, while Mobike and Anywheel have applied to expand their fleets.