SINGAPORE - The manufacturing sector was once more behind Singapore's economic growth in the second quarter, according to the latest figures from the Ministry of Trade and Industry (MTI) on Monday (Aug 13).

It expanded by 10.2 per cent year on year in Q2 2018, which the MTI called a "robust" showing, against the 10.8 per cent growth in the first quarter, amid global tensions over trade skirmishes and what the ministry called in its outlook "uncertainties and downside risks in the global economy".

On a quarter-on-quarter, seasonally adjusted annualised basis, manufacturing grew by 1.8 per cent, a slowdown from the 26.2 per cent expansion in the quarter before. The sector accounts for about one-fifth of Singapore's economy.

All manufacturing clusters notched gains, with the pick-up largely thanks to the electronics, biomedical and transport engineering clusters.

The services sector - which makes up two-thirds of the economy and includes retail, hospitality, logistics, finance, and business services - grew by 2.8 per cent year on year, spearheaded by finance and insurance, as well as the information and communications and accommodation and food services segments.

This was down from 4 per cent growth in the quarter before.

The sector picked up by 0.4 per cent on a seasonally adjusted, quarterly basis, compared with a shrinkage of 1.6 per cent previously. 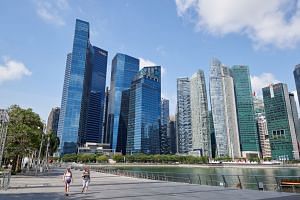 Singapore's struggling construction sector saw a glimmer of improvement, with its year-on-year decline easing to 4.6 per cent, better than the 5.2 per cent contraction the quarter before.

But construction, weighed down largely by public sector projects, was still down by 15.4 per cent on a quarter-on-quarter, seasonally-adjusted annualised basis, reversing the 0.8 per cent uptick in the previous year.

Noting that Singapore's economic growth will continue to be supported primarily by outward-oriented sectors, the MTI said: "In particular, the manufacturing sector is expected to continue to expand, supported in part by the electronics cluster, although growth will moderate from the high levels seen in the first half of the year.

"Similarly, while outward-oriented services sectors such as finance and insurance, wholesale trade and transportation and storage are projected to remain on an expansionary path, their growth momentum is likely to ease in tandem with the moderation in growth projected for key advanced and regional economies in the second half of the year."

But the construction sector "is likely to stay lacklustre for the rest of the year", the ministry added, "given the earlier weakness in contracts awarded".

The official GDP growth forecast for 2018 has been maintained at between 2.5 per cent and 3.5 per cent.