SINGAPORE - Singapore's economy grew by 3.9 per cent year-on-year in the second quarter, easing from the previous quarter when it clocked 4.5 per cent growth, and falling short of market expectations.

The latest Ministry of Trade and Industry (MTI) figures released on Monday (Aug 13), while higher than advance estimates of 3.8 per cent, fell below economists' predictions of 4.1 per cent growth.

Against the external backdrop of trade tensions, the ministry has kept to its Gross Domestic Product (GDP) growth forecast of 2.5 per cent to 3.5 per cent for 2018. This follows last year's expansion of 3.6 per cent.

However, expansion is expected to slow in the second half of the year, the MTI said. it noted that risks and uncertainties have increased in the global economy.

"There is a risk of a further escalation of the ongoing trade conflicts that could lead to a vicious cycle of tit-for-tat measures between the United States and other major economies," the MTI said. "Should this happen, there could be a sharp fall in global business and consumer confidence and in turn, investment and consumption spending."

Another issue is that global financial conditions are generally tightening, the MTI added.

This could see faster-than-expected normalisation of monetary policy in the US, triggering disorderly capital outflows from emerging market economies in the region and leading to a reduction in investment and consumption growth.

While economic growth slowed to 0.6 per cent on a quarter-on-quarter seasonally-adjusted annualised basis - compared to 2.2 per cent in the first quarter of the year - this can be seen as a normalisation process amid the peaking of the electronics cycle and tighter liquidity conditions, according to DBS senior economist Irvin Seah.

Manufacturing grew 10.2 per cent year-on-year in the second quarter this year, extending the 10.8 per cent growth in the previous quarter.

However, the services sector grew 2.8 per cent year-on-year, compared to 4.0 per cent in the first three months of 2018. 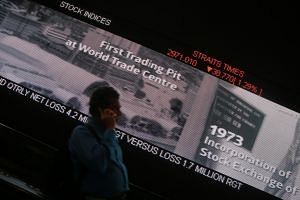 Recently-introduced property cooling measures will likely worsen contributions from real estate services as well, he added, following a slowdown of the business services sector - which captures real estate property transactions - in the second quarter of the year.

Asked about the impact of property cooling measures, MTI economics division director Yong Yik Wei stressed that while there will be an impact on the real estate sector, it only constitutes about 4 per cent of Singapore's GDP.

"We should also bear in mind that the Singapore economy is quite diversified, so we think that it should be able to withstand those property measures," she added.

The construction industry also saw a lacklustre showing, contracting 4.6 per cent year-on-year in the second quarter. But Ms Yong noted that it should bottom out and remains supported by an increase in contracts awarded, mainly from the public sector.

Looking ahead, MTI said that outward-oriented sectors will continue supporting Singapore's growth, with the manufacturing sector expected to continue its expansion - though at a more subdued level.