SINGAPORE - S&P Global Ratings said the default of troubled water and power company, Hyflux, could be the "first wagon in a train" of financial distress cases to come in Singapore, as lending conditions adjust to the economic slowdown and become less favourable.

The credit ratings agency also noted in a report dated April 8 that the credit horizon for the Singapore dollar bond market could be cloudy over the next 12 to 18 months.

"Due to very low rates and yields in the past five years, Singapore investors, both institutional and retail, have sometimes opted for riskier bonds, to increase cash returns. Lending appetite driven by abundant liquidity has allowed less-established, often smaller companies to tap the market. Such players are typically more vulnerable to economic up and downs," said S&P.

Given that the global trading environment may not be as supportive as it used to be, a marked slowdown of earnings looks increasingly plausible. This may pose an issue in Singapore, where median leverage - debt-to-Ebitda ratio (earnings before interest, tax, depreciation and amortisation) - is high at close to six times, S&P noted.

Hyflux recently announced that it will restructure its outstanding bonds, and S&P is of the view that more distress situations are likely to appear in Singapore, as a more cautious investor sentiment may exacerbate refinancing risk.

By S&P's estimates, close to $4 billion of Singapore-dollar corporate bonds are maturing by the end of 2019. That number climbs to U$10 billion in 2020, S&P said. 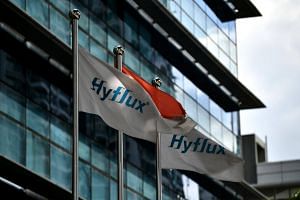 No 'impropriety' by DBS found to date in May 2016 sale of $500m in Hyflux perpetual securities: MAS 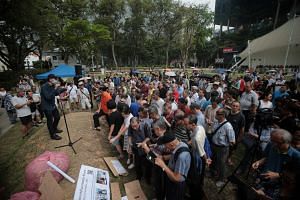 First, that no sector is immune to financial troubles. Distressed situations in Singapore over the past two to three years have been confined to the energy and commodity sectors following volatile prices, S&P noted. Some examples include Swiber Holdings and KrisEnergy in 2016; as well as Ezion Holdings and Nam Cheong in 2017.

"However, the default of telecom services provider PT Trikomsel Oke Tbk in 2015 highlights that even companies in defensive sectors, widely understood as having sound resilience and growth potential, are vulnerable to financial distress and default risk if they rely heavily on debt for their expansion, and do not appropriately manage their liquidity."

Second, situations can evolve quickly for companies with narrow or uncertain earnings quality, S&P said. This means that lenders should do their due diligence before, and surveil their money after investing.

"Following some erratic operating performance in the previous years, Hyflux still managed to issue perpetual securities in May 2016. Numbers at that time already suggested that the company's capital structure was hardly sustainable, with a ratio of net debt to Ebitda above 10 times in 2015, and negative Ebitda in 2014, driven by performance issues at the company's Tuaspring desalination and power plant."

After a rebound in 2016 with Ebitda of $179 million, Hyflux posted a negative Ebitda of $68 million in 2017, and deepened its operating losses to $256 million in 2018 in the nine months to end-September. As at Sept 30, 2018, short-term debt was $508 million and cash $194 million, making a capital structure revamp inevitable in the light of the earnings momentum, S&P pointed out.

Third, losses can be harsh depending on the characteristics of debt instruments outstanding. This is because the market has seen the introduction of complex debt instruments compared with senior unsecured notes, S&P said. 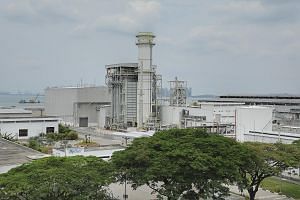 Water firm Hyflux in race against time to stay afloat

"In 2012 for instance, Genting Singapore plc issued a total of $2.3 billion in perpetual subordinated bonds in two separate tranches, $1.8 billion for institutional and $500 million for retail investors. These benchmark transactions have contributed to open the market for hybrid capital."

"Hyflux is seeking lender's consent to restructure $2.8 billion of liabilities. As per the company's disclosures, senior lenders recovery should be limited, and subordinated lenders may not recoup a cent, highlighting the higher credit risk they bear."

Lastly, S&P also noted that investors should not make assumptions regarding a private company's importance to the government, and hence take a bailout as likely.

On April 1, Parliament announced that taxpayers' money will not be used to alleviate the financial burden on Hyflux.

"This means that while water security is an important theme in Singapore, making Hyflux's role important to the country, it may not suffice to engender government support, in the absence of a strong link, that is, ownership," S&P said.