SYDNEY (REUTERS) - The Australian dollar was picking up the pieces on Thursday (Jan 3) after a torrent of automated selling against the yen sent it plunging to multi-year lows on a host of major currencies.

The Aussie suffered some of the largest intra-day falls in its history amid a drought of liquidity and a cascade of computerised sales.

"Violent moves in AUD and JPY this morning bear all the hallmarks of a 'flash crash' similar to that which befell NZD in August 2015 and GBP in October 2016," said Ray Attrill, head of FX strategy at National Australia Bank.

"The fact that over half the move down in both these pairs has since been retraced is testimony to today's moves being first and foremost a liquidity event."

One theory was that Japanese investors who had been crowded into trades borrowing yen to buy higher yielding currencies, were forced out en masse when major chart levels cracked.

When the smoke cleared, buyers returned and it was last changing hands at 74.40 yen.

The selling spilled over into other crosses and the Aussie sank to as deep as US$0.6715, the lowest since March 2009, having started around US$0.6984.

Again, bargain hunters emerged and it was last at US$0.6922.

The New Zealand dollar also took an initial beating on the yen to hit its lowest since late 2012, though whether any trades were done around those levels was hard to say. 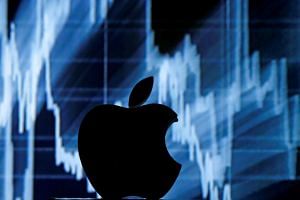 The rout from risk was sparked in part by an earnings warning from Apple Inc. It blamed sluggish iPhone sales in China, adding to evidence of a deepening economic slowdown in the Asian giant.

Some investors fled to the relative safety of Australia's triple-A rated debt, sending 10-year bond yields diving to their lowest since late 2016.

Concerns about global growth also led the futures market to price in slightly more chance of a cut in interest rates by the Reserve Bank of Australia (RBA).

Yet the Aussie's decline is providing a boost to the economy that makes it less likely the RBA will have to take the drastic step of cutting rates from already record lows.

Not only does a lower currency make exports more competitive but it offers an extra earnings windfall given Australia's commodities are priced in US dollars.

Gold, for instance, is trading at its highest level ever in Australian dollar terms around A$1,856 per ounce having climbed 12 per cent in just the past month.

Profits from iron ore, coal and liquefied natural gas will all get a lift, fattening the country's terms of trade and the government's tax coffers.