NEW YORK (REUTERS) - Apple's warning about slowing Chinese sales eroded more than US$50 billion (S$68.4 billion) of its US$750 billion market capitalisation on Wednesday afternoon (Jan 2). It will also have taken a chunk out of confidence in the global economy.

Investors don't always believe China's official economic data, but they can't brush aside news that iPhone sales in the country have rapidly decelerated, even if Apple is possibly at the sharp end of the slowdown.

Chief executive Tim Cook said in a letter to investors that the US tech firm expects US$84 billion of revenue in its latest financial quarter. That's about 8 per cent less than its earlier guidance.

Mr Cook said the company was surprised by the magnitude of the economic deceleration in emerging markets, "particularly in Greater China", and said that the fall in revenue relative to what was expected is all accounted for by lower iPhone revenue. Markets had already ended 2018 on a wobbly note; Apple shares fell 8 per cent after Wednesday's close.

China accounted for nearly 20 per cent of all Apple revenue in the last quarter, so Mr Cook is implying a very sharp fall in Chinese demand. This could be merely one company's experience - the price of the average iPhone sold has risen by about 30 per cent over the past year.

There are other factors that are still impossible to quantify, like the effect of trade tensions, questions over spying and the detention of an executive from Chinese telecoms-equipment maker Huawei in December, all of which may have made iconic American goods less popular in the Middle Kingdom.

Still, Mr Cook was careful to point out that smartphone sales overall in China have contracted. And it was already pretty clear that things weren't going great in the Chinese economy, which contributes around one-fifth of the world's output, according to the International Monetary Fund. 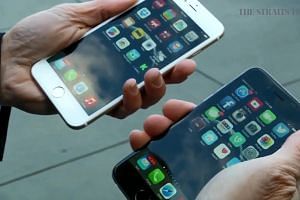 Retail sales grew just 8.1 per cent in November, year-on-year, their slowest pace in 15 years. Car sales have fallen several months in a row. The iPhone is a classic symbol of the kind of mass affluence China covets for its 1.4 billion population. When demand falters, it's an ominous sign of what may lie ahead for the global economy.

Apple said it expected to make US$84 billion of revenue in the three months ending Dec 29, around 8 per cent less than previous guidance had suggested.

The main reason was an economic deceleration in China, chief executive Tim Cook said in a letter to investors on Jan 2, published after the market had closed.

Weakness in some emerging markets had a greater impact than the company had foreseen on device sales, which also resulted in fewer iPhone upgrades than anticipated.

Apple said that lower iPhone revenue, mostly in Greater China, accounted for all the revenue shortfall relative to its earlier guidance.

Apple shares fell around 7 per cent in after-market trading shortly after the statement.