SINGAPORE - OCBC Bank, Singapore's second-largest bank, has joined Singtel's regional payment alliance in a move that by March 2020 will allow its customers to scan and pay for purchases in Thailand and Japan.

The partnership under the VIA alliance will see customers of the bank offered competitive and transparent rates when making purchases overseas, OCBC and Singtel said on Monday (Oct 21).

OCBC is the latest company that Singtel has successfully wooed to join its year-old VIA initiative as Singapore's largest telco seeks to grow its businesses in new areas amid an increasingly crowded telecommunications market.

Singtel has an e-wallet called Dash as well as a partnership with gaming product company Razer to unify cashless payment in South-east Asia. Dash is also part of VIA.

OCBC customers from next year need only scan the QR code at VIA merchants with the Pay Anyone app to make purchases with funds from their bank accounts.

From next month (November), they can also top up their Dash wallet more efficiently, without having to go through payment gateway eNets.

Singtel International chief executive Arthur Lang said that VIA merchants in Japan and Thailand will have a larger customer base as a result of the tie-up. 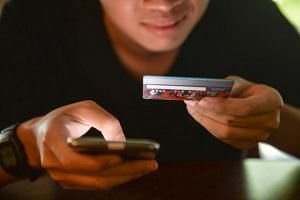 DBS looks to data trove to grow PayLah e-wallet; aims to more than double users to 3.5 million by 2023

At least 1.6 million stores in Thailand and 100,000 shops in Japan accept VIA, according to previous reports.

They include shops at Haneda Airport in Japan and several shops in Central World shopping mall in Thailand including bag retailer Naraya.

OCBC chief operating officer Ching Wei Hong said that the bank's customers can use its Pay Anyone app to pay for purchases overseas without incurring hefty foreign exchange rates with the tie-up.

"Customers will be able to top up their Dash wallets directly with OCBC Pay Anyone too," he said.

Business news outlet Bloomberg reported in August that OCBC and Singtel representatives had met to discuss growth areas, including the possibility of applying for a digital bank licence together.