The possible presence of water, helium and air that could allow for future human settlements is driving India and other nations to reach the moon, says the writer.

DHAKA (THE DAILY STAR/ASIA NEWS NETWORK) - It came as a disappointment after the mega build-up to the launch of India's second mission to the moon on July 15.

The launch of Chandrayaan-2 was scrapped by the Indian Space Research Organisation (ISRO) about an hour before the lift-off of the country's heaviest rocket Geo-Synchronised Launch Vehicle Mark III carrying the three-module spacecraft, which would have begun a 52-day journey across 384,000 kilometres in the space before making a soft-landing by the lander on September 6.

Chandrayaan-2, India's most ambitious space mission so far, is comprised of three instruments: an orbiter (which is to keep circling the moon at a distance of 100km from lunar surface for about a year, taking pictures of the surface and sending back information on the moon's atmosphere), the lander, and the rover (which will conduct experiments on the moon's surface, studying its rocks and soil for signs of the presence of water below the surface, helium, a key source of power, and other minerals).

The objective is to get an insight into the evolution of not only the moon but also of the entire solar system.

While Chandrayaan-2 would have been India's second shot at the moon, eleven years after its successful first mission in October 2008, it would have been the country's maiden landing of the lander and the rover on the lunar surface, and would put it in the exclusive group of space powers Russia, the US and China that have done so.

It would also help India, with its low-cost space programmes, compete in the lucrative and increasingly crowded global commercial space market.

Chandrayaan-1, India's first moon mission, did not do the landing on the earth's satellite but orbited the celestial body taking high-resolution photos from a distance of 100km, finding traces of water on the lunar surface.

More importantly, Chandrayaan-2 would have landed on the South Pole of the moon, a hitherto unexplored area.

All the 28 landings on the moon so far, including the six human ones, have been in its equatorial region.

Scientists are of the view that the polar parts of the moon hold out much greater promises of new discovery because it is an extremely cold region, with the temperature in many parts within the range of minus-200 degree centigrade. 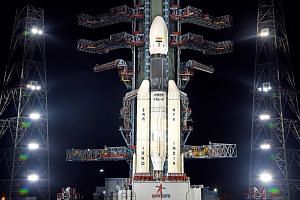 India unveils spacecraft for moon-landing mission, putting nation in the league of US, China

This is mainly due to the moon's almost erect position around its axis, which prevents sunlight from ever reaching some of the polar regions.

The run-up to India's second moon mission has set off a fresh global interest in lunar expeditions and stepped up the international space race half a century after American astronaut Neil Armstrong set his foot on the moon.

China landed its rover Chang'e 4 on the moon in January this year and the United States is trying to conduct another human landing on the moon by 2024 as a stop along the way to the Mars.

One cannot but recall the fact that the US put Armstrong on the moon in a bid to overtake the Soviet Union stealing a march on it by making the Sputnik on the lunar surface.

Even smaller countries like South Korea and Israel are pursuing moon missions using robots although the Israeli robot had crash-landed on the lunar surface leading to its failure.

In any moon mission, it is the landing which is the most challenging task. When the lander and the rover separate from the orbiter running at 6,000km per hour, both have to be slowed down to about 3km an hour for the soft landing. No wonder the ISRO chief K Sivan considers it "the most terrifying moment" of the moon mission.

Why is everyone reaching for the moon? What is behind the new race for the space-the final frontier of human quest for knowledge? For India, reaching the moon would highlight its technological advances and capabilities.

Flexing technological muscles, global space ambitions and national pride are stated to be among the motives behind the space race.

Beginning in early 1960s, India's space programme has gained more prominence under Prime Minister Narendra Modi, who has promoted the space programme as a symbol of the country's growing international standing and a military power in outer space, as was evident in its successful shooting down of one of its satellites earlier this year.

But there are more important considerations behind the race for the moon.

If the presence of water in lunar subsurface and the helium can be conclusively proved and harnessed, and if the air in the moon can be breathable, these will be helpful for future human settlements on the moon including a permanent space station there.

This will bring up the question of rights over resources in the outer space. There will be a stage when the international community will have to lay down rules for the use of these resources.

India would not like to be left behind in shaping these rules.

Given that outer space has become such an intrinsic part of human lives on the earth in a range of areas including communications and security that are being done by satellites, the race for space is but natural.

Secondly, a foothold on the moon may also give access to explorations deeper into other unchartered areas of the solar system.

Thirdly, India wants to further cement its position as a hub of low-cost space programmes.

Its first Mars satellite cost less than the budget of the space movie "Gravity".

The USD-140-million budget for Chandrayaan-2 is far less than the USD 25 billion (equivalent of over USD 100 billion in current prices) spent by the United States on its Apollo programme in 1969.

The cost effectiveness came largely due to designing and building almost all components of Chandrayaan-2 domestically. India had prepared its most powerful rocket, the GSLV Mk III, largely following technology denial by the US in 1990s when ties between the two countries were very strained.

India built the cryogenic engine of the rocket indigenously partly after Russia gave in under American pressure not to sell the engine to India in 1993, as neither New Delhi nor Moscow was at that time signatory to the Missile Technology Control Regime.

India also plans to send a manned space mission by 2022 and land a probe on the Mars.

In 2014, India became only the fourth nation to put a satellite into orbit around the Red Planet.

China has successfully sent its first manned space mission way back in 2003.