NEW DELHI - Early this year, Andhra Pradesh Chief Minister Chandrababu Naidu quit an alliance with the Bharatiya Janata Party (BJP) after not being allotted enough federal funds for the capital city of Amaravati, which he has been developing with Singapore's help.

Since then, Mr Naidu, the leader of Telugu Desam Party, a regional party from Andhra Pradesh state, has been part of preliminary discussions with the Congress party and a host of other regional parties to build an opposition alliance against the BJP, led by Prime Minister Narendra Modi, for the general election next year.

Mr Naidu has taken a lead by travelling to different parts of the country to meet opposition leaders in an effort to bring them closer to an alliance .

For Mr Naidu, analysts said, the successful creation of a grand alliance against the BJP is part of an electoral strategy to return to power in Andhra Pradesh where he has several unfinished projects, including the building of the capital city of Amaravati.

"Naidu has both local and national-level compulsions... At one level, he is facing an election in Andhra Pradesh (next year) along with the general elections. He needs allies and does not want votes to be split," said Dr Sandeep Shastri, a political analyst and pro vice-chancellor of Jain University. "At another level, he has always been a player in national politics.''

"It is critical for him to be part of a national alliance opposed to the BJP so that voters in Andhra Pradesh take his political rhetoric seriously,'' he added.

Mr Modi came to power in 2014 on a landslide victory and has remained a popular leader. Under his leadership, the BJP has dominated India's political scene. Over the past five years, the BJP went from being in power in five states to 15 states.

Yet the party was defeated by Congress in the state elections in Rajasthan, Madhya Pradesh and Chattisgarh on Tuesday (Dec 11), with Mr Modi saying the BJP "accept the people's mandate with humility''. 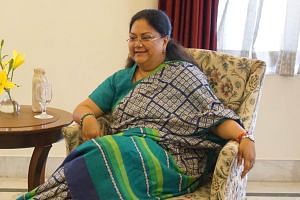 The defeat is seen to be due to anti-incumbency sentiment, farmers' unrest and growing unemployment.

And it is expected to give the alliance talks a further boost.

"The efforts to build this grand alliance will now gain momentum. But in order to defeat Mr Modi, the regional parties (in the alliance) need to do very well in their own states and the Congress needs to be able to win in a direct fight against the BJP,'' said Mr Rasheed Kidwai, a visiting fellow with think-tank Observer Research Foundation.

Nomura India said in a note that "unseating the BJP from its traditional strongholds will potentially embolden the formation of a grand coalition of INC-led disparate regional parties". INC refers to the Indian National Congress, or the Congress party.

On Monday, the Congress led by its president Rahul Gandhi and Mr Naidu held preliminary talks with over a dozen parties, including representatives of the Aam Admi Party and Left parties, and regional leaders like Ms Mamata Banerjee of the Trinamool Congress.

A statement after the talks urged all liberal, progressive and secular forces to join the opposition

But taking on Mr Modi, who remains a popular leader, is expected to be a challenge.

"Everybody wants a grand alliance but nobody has that magical formula. But consultations will continue. That is clear,'' said Mr Sudhir Panwar of the Samajwadi Party.

"The first challenge is for Congress and the election machinery to capture people's imagination.''