Akash, 27, is the son of Indian business tycoon Mukesh Ambani, whose estimated worth is US$50 billion (S$68 billion), according to Forbes' 2019 Billionaires List. He is the chairman of the oil-to-telecom conglomerate Reliance Industries.

Shloka, 28, is the daughter of Russel Mehta, the managing director of Rosy Blue, ranked as one of the top diamond companies in India.

Akash Ambani and Shloka Mehta attended school together, according to a source who knows both families. Both hold positions in their respective family businesses.

The wedding ceremony is scheduled to take place at the Jio World Centre at the Bandra-Kurla complex in Mumbai on Saturday evening.

The evening's celebration will be followed by a blessings ceremony on Sunday at the same venue and a grand reception at the Ambani home in Mumbai on Monday. 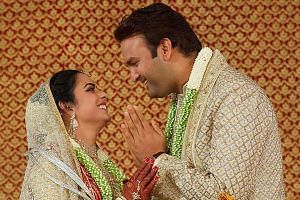 There was a three-day pre-wedding bash at St Moritz in Switzerland on Feb 23 to 25 which saw performances by Chris Martin of Coldplay and The Chainsmokers, Vogue India reported.

The pre-celebrations in Mumbai included a Harry Potter-themed party at Antilia, the 27-floor skyscraper residence of the Ambanis near the Mumbai seafront.

The street in front of Antilia has been decorated with lights for weeks leading up to the events.

In December, lavish celebrations were held for the wedding of Mukesh Ambani's daughter Isha, 27, to Anand Piramal, 33, the son of Indian billionaire industrialist Ajay Piramal.