The scheme, which the government dubs "Modicare", will provide 100 million families, or about 500 million poor people, with health cover of 500,000 rupees (S$9,447) per year for free treatment of serious ailments.

The measures are Mr Modi's latest attempt to reform a public health system that faces a shortage of hospitals and doctors. The government has also in recent years capped prices of critical drugs and medical devices and increased health funding.

But critics say the scheme has been launched in a hurry for political gain and lacks adequate funds to support it.

India spends only about 1 per cent of its GDP on public health, among the world's lowest, and the health ministry estimates such funding leads to "catastrophic" expenses that push 7 per cent of the population into poverty each year.

"This is the world's biggest healthcare scheme, benefiting more than the combined population of the United States, Canada and Mexico," Mr Modi said after launching the nation-wide plan from Ranchi, the capital of the eastern state of Jharkhand.

No separate registration would be required for the scheme and the people could check online whether they were eligible, Mr Modi said. 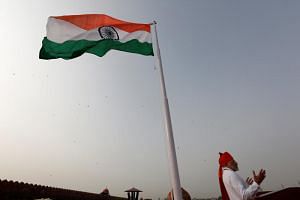 Modi to insure half a billion Indians as elections draw near

Mr Vinod K Paul, a senior official at the government think tank NITI Aayog told Reuters in an interview last week the benefits would be available at hundreds of empanelled private hospitals as well.

"India's health system is never going to be the same. It's a turning point," he said.

Private hospitals and pharmaceutical companies expect the plan would boost their business.

The scheme has been called a "game changer" by the chairman of India's Apollo Hospitals Enterprise, Prathap Reddy, while research analysts at Jefferies have said companies such as Healthcare Global Enterprises and Narayana Hrudayalaya are likely to benefit.

The plan will be initially rolled out in 27 states, where the federal government will bear 60 per cent of the costs and 40 per cent would be borne by state governments.