Minister Isnaraissah said the cloud seeding was supposed to be carried out on Sunday but this had to be postponed due to unfavourable atmospheric and cloud conditions.

"A briefing will be carried out at 8.30am tomorrow (Monday) and the cloud seeding will be done from 11am to 12pm. Hopefully the cloud conditions will facilitate our cloud-seeding plans," she said after flagging off the Kimia Heritage Run 110 Years at Esplanade on Sunday.

Ms Isnaraissah, however, warned that cloud seeding is not a solution to curb the recurring haze.

"We still need to address the issue from the real source of the haze," she said.

In Johor, the worsening haze situation has led to the closure of more than 300 schools and kindergartens in Muar, Tangkak and Pontian, affecting about 90,000 students after the Air Pollutant Index (API) reached very unhealthy levels.

State Education Department director Azman Adnan said the Education Ministry stated that if the API reading was more than 200, all schools in the area or district should be closed down immediately.

"Based on the API reading, which recorded an increase, the school session in the two districts will be cancelled on Sunday," said Mr Azman in a statement on Saturday.

The decision was based on the ministry's letter and guidelines on the National Haze Action Plan, as well as discussion with the Department of Environment and Muar and Tangkak district offices, he added.

"For principals, headmasters and teachers, they must be present at schools as usual and carry out their duties in line with the ministry's guidelines on managing lessons and learning due to disasters," Mr Azman said.

Announcing the closures in Pontian, Mr Azman said the decision was made after the API for the area shot to 220.

"All parents should not send their children to schools or kindergartens," he said.

The weekend rest days in Johor are Fridays and Saturdays while Sunday is a working day. 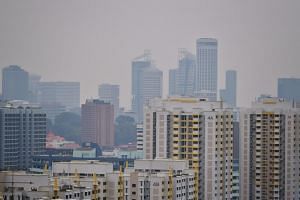 "For areas that recorded very unhealthy API levels, the state government will provide face masks for free at health clinics," he said, and advised the people to get the masks to protect their health.

A check on the API readings on the Department of Environment's website showed an increase of API levels in the state.

Meanwhile Melaka called off all sports and outdoor activities after the haze situation worsened in the state on Sunday.

“Delaying the activities was necessary after considering advice from the Environment Department (DoE), especially on the health risks (posed to) athletes, coaches and spectators,” he said in a statement on Sunday.

As at 3pm, three places in Malaysia have recorded very unhealthy API levels.

According to DoE data, API levels in Tangkak was 258, while Melaka city and Kuching in Sarawak had API levels of 220 and 204 respectively.

Sabah state also saw conditions worsen, with the air quality in two districts -Tawau and Sandakan - falling to unhealthy levels on Sunday. The highest API reading reached in Tawau was 153 while the highest reading for Sandakan was 118.

State Education and Innovation Minister Yusof Yacob said schools located in districts affected by the haze in Sabah will be ordered to close if the situation worsens.

“We are monitoring the current haze situation and if there is a need to close the schools, we will announce that," he said on Sunday.