The Philippines is sending to Singapore next month two of the world's rarest raptors in a move to protect the species from extinction.

The two Philippine eagles will be airlifted to Singapore on June 4, under a wildlife loan agreement which the Department of Environment and Natural Resources signed with Wildlife Reserves Singapore (WRS) yesterday.

The pair - a 15-year-old male named Geothermica and a 17-year-old female named Sambisig - will be housed at Jurong Bird Park. Both were born in captivity at the Philippine Eagle Centre in Davao City.

Mr Dennis Salvador, executive director of the Philippine Eagle Foundation, said: "This serves as an insurance policy for our eagles. If something bad happens to their population here, we have a gene pool outside the country that we can rely on to continue propagating them in captivity."

With a wing span of 2m and a body length of 1m, the Philippine eagle is considered the largest eagle species. It is listed as "critically endangered" by the International Union for Conservation of Nature.

A top predator that feeds on monkeys, lemurs, squirrels and bats, it used to roam in fairly large numbers across the Philippines. But decades of deforestation and urban sprawl have nearly decimated its territories, and its population has rapidly declined.

Only about 800 are left in the wild today. Thirty-two are in breeding centres. 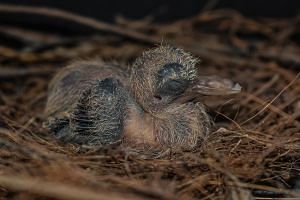 Philippine eagles pair for life and lay just one egg every two years.

Singapore's Ambassador to the Philippines Gerard Ho said: "The two eagles are the living and breathing manifestation of our close bilateral relations. The Philippine eagle is known to stick to one partner for life. We're confident... the Philippines and Singapore will stick to each other for life."

Hopes are high that the two eagles will mate and produce offspring. They will be housed in separate enclosures during their first weeks in Singapore.

WRS deputy chief executive officer and chief life sciences officer Cheng Wen-Haur said: "Once they get used to each other and we can see a close relationship forming, we will put them together to allow for the next phase."

In the wild, a pair of Philippine eagles will require about 7,000ha of forest land to successfully breed. Hunters and poachers pose a constant threat to their offspring, which stay in the nest for at least two years.

Dr Cheng said an avian care team will focus on efforts to get the two eagles to breed.

The park has successfully bred many threatened bird species, including the Santa Cruz ground dove, the straw-headed bulbul and the blue-throated macaw.

WRS currently has 30 conservation projects. It supports groups in the Philippines working to protect the Philippine cockatoo, southern rufous hornbill and other endangered species.

Dr Cheng added: "It makes sense to have them in more than one nation so that... you wouldn't be caught with all your eggs in one basket."