Wildlife Reserves Singapore (WRS) said in a statement on Wednesday (Jan 23) that the first of the Santa Cruz ground dove chicks hatched on Dec 31 last year.

The bird is listed as endangered in the International Union for Conservation of Nature's Red List.

In August last year, 60 of them - likely to be half of the world's wild population - were rescued from poachers in the Solomon Islands.

After the birds were trapped in cages, a volcanic eruption destroyed about three-quarters of what is believed to be their sole natural habitat, the island of Tinakula, which is part of the Solomon Islands.

WRS said that the 60 rescued birds currently form the world's only assurance colony in Jurong Bird Park and the ultimate goal would be to repopulate their homeland when circumstances allow.

Given the volatile environment of the Solomon Islands, not much data on the species has been recorded, WRS added.

"This means that all the information that can be collected from the birds under human care is extremely valuable and may help better understand the species and its needs in the wild," it said in the statement.

Jurong Bird Park has also seen similar success with a critically endangered songbird that is among the most heavily traded of its kind in South-east Asia.

Singapore is likely to be the only stronghold of the straw-headed bulbul, with just over 200 individuals remaining in the wild, according to the local nature community.

It is believed that this species is extinct in half of its range states in South-east Asia. 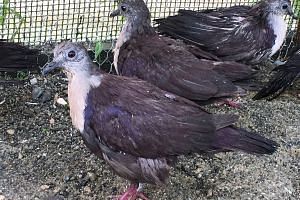 In the past two years, Jurong Bird Park has successfully bred four of these birds, with the newest chick arriving in July last year.

The first chick hatched in 2017, marking the first time in over a decade that these songbirds were bred under human care.

It was also the first time that this was done as part of a conservation breeding programme, which Jurong Bird Park led.

Just like some other songbirds, the straw-headed bulbul faces threats from illegal and unsustainable wildlife trade.

The chicks are on display at the park's Wings of Asia exhibit, which also houses other threatened avian species like the Santa Cruz ground dove.