KUALA LUMPUR - Malaysian Prime Minister Mahathir Mohamad has defended the country's record on democracy and his past leadership in a speech at the Oxford Union in Britain.

The first Malaysian and Asean leader to be invited to address the forum, Tun Dr Mahathir spoke on Friday (Jan 18) about Malaysia's politics and the general election last May which led to a change in government for the first time in its six-decade history.

"The election system in Malaysia is proof that we are a democratic country," the Prime Minister said in his address, which was carried live by Astro Awani.

"Many will still dispute the election system, but what I would like to emphasise is that after Malaysia has achieved independence and gone through 14 general elections, future elections will receive much fewer disputes compared to past ones," he said.

"In terms of the people selecting its leaders, Malaysia has proven that it is democratic to that extent," he said.

Dr Mahathir, 93, who was known for governing with an iron fist during his first tenure as PM from 1981 to 2003, conceded that the country had draconian laws like the now-repealed Internal Security Act, which allowed for detention without trial and could be abused by the government against dissenters.

"There may be some things that did not conform to the democratic ideals, such as the ISA law," he said, referring to it as a statute "inherited... from our colonial masters" that was intended to guard national security.

He noted that he himself was called a dictator during his leadership.

"I just would like to point out that in the history of nations, there has not been a single dictator who stepped down while he was in power and allowed others to take over from him," he said. "Dictators don't usually resign or retire."

Asked by Oxford Union president Daniel Wilkinson about Malaysia's decision to ban Israeli athletes from taking part in the World Para Swimming Championships to be held in Sarawak in July, the Prime Minister said that Israelis should not come to Malaysia as the country does not have diplomatic relations with Israel. 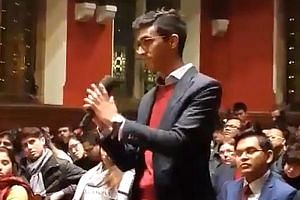 Israel had condemned the decision on Thursday, and said the decision was inspired by Dr Mahathir's "rabid anti-Semitism", reported newswire agency Reuters.

"I can't understand this. We talk about freedom of speech and yet you cannot say anything against Israel, against the Jews, why is that so? If we are free to say what we like, we can say it, but we are being regarded as anti-Semitic...," remarked Dr Mahathir.

The Oxford Union is one of Britain's oldest debating societies, with a majority of its members from Oxford University.